No, this footage has circulated since 2019 in reports about a crocodile in west India

The video was published on Facebook here on October 16, 2020. The footage has been viewed more than 32,700 times and shared more than 350 times. 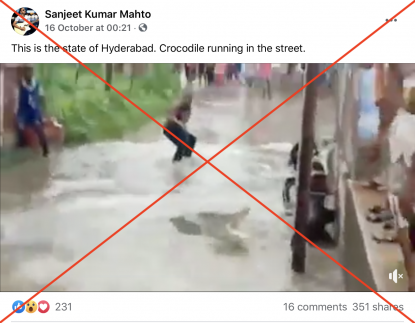 The caption reads: “This is the state of Hyderabad. Crocodile running in the street.”

The post circulated as residents in the outskirts of Hyderabad faced flooding caused by the heavy rain, as AFP reported here.

A reverse image search on Google found an extended version of the footage published on YouTube here on August 31, 2019. The video was published on the channel of DeshGujarat, a local news outlet in the west Indian state of Gujarat. 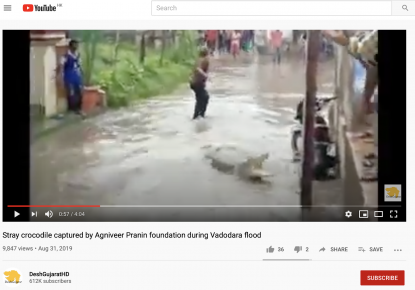 A screenshot, taken on October 21, 2020, of the YouTube video from DeshGujarat.

Severe flooding occurred in Vadodara, the third largest city in Gujarat, in August 2019, as reported here by Indian newspaper The Times of India on August 1, 2019.

In 2019, similar footage was also published by other Indian media outlets on YouTube here and here on August 4 and 7 respectively.

The crocodile incident in Vadodara in August 2019 was also reported here by India TV News and here by Asian News International.

On Twitter on October 15, 2020, Hyderabad police refuted the recent false claim that circulated with the video, clarifying the footage “is from Vadodara, not Hyderabad.” 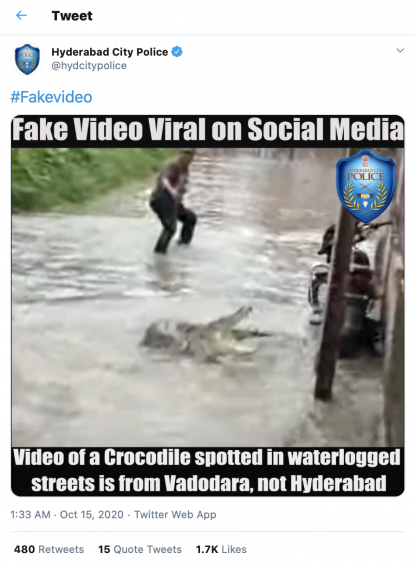 A screenshot, taken on October 22, 2020, of the police clarification tweet.

The video previously circulated alongside false claims in Pakistan in August 2020 and was debunked by AFP here.