A  recent post appealing for help to find a missing child pictured wearing a blue top and white shorts has been shared thousands of times on Facebook. However, the appeal is outdated; the girl in the picture went missing in 2014 in the US state of Alabama, and was later found dead. The image was used by her family in posters alerting the public to her disappearance.

“She is missing, please pass this on and help find her,” reads the caption in this Facebook post published on October 17, 2020. The post includes a triptych  image of a young girl smiling at the camera, with an overlaid text that reads: “If you care she’s missing share!!"

The post, which has since been shared more than 1,000 times, has received numerous comments expressing concern about the girl’s disappearance. 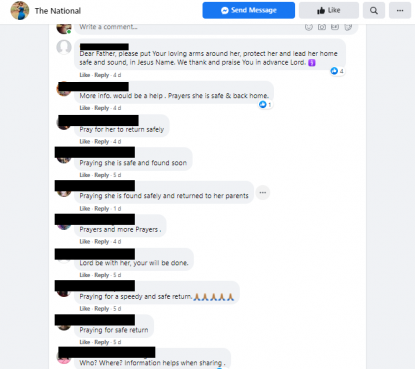 The Facebook page behind the post, "The National", has 75,000 followers and  describes itself as a "News & Media website". According to Facebook's transparency section, the people managing the page are geolocated in Kenya.

Appeal to find the missing girl is not recent

Hiawayi disappeared on September 16, 2014, and was found dead two days later at an abandoned building in Prichard, Alabama. Autopsy reports indicated that she was sexually assaulted before being killed, leading to the arrest of her father, Hiawatha Robinson.

He was sentenced in October 2016 to 100 years in prison for killing Hiawayi during a sexual assault.

Hiawayi’s story was widely reported in the media (here, here and here) and it is in a documentary titled "The Murder of Hiawayi Robinson" that AFP Fact Check found the exact picture being shared in the misleading Facebook post.

At the 9’29" mark, Hiawayi’s mother and father are heard pleading to the public to help them find their daughter and a crowd standing behind them holding posters featuring the picture in question. 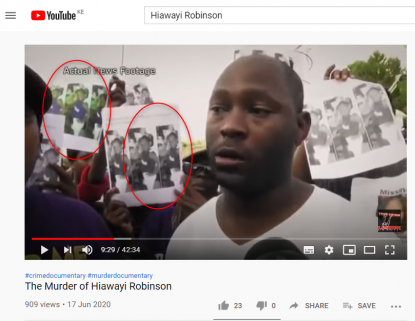 A screenshot of "The Murder of Hiawayi Robinson" documentary on YouTube showing the missing child posters, taken on October 21, 2020

The same poster in black and white can be seen in this report by Fox10 News. 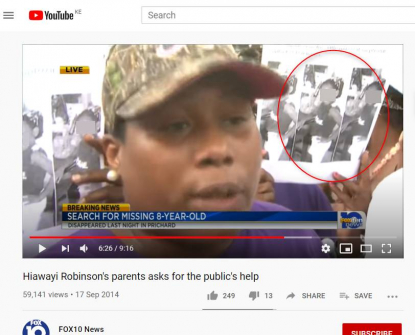