A photo of former Australian Prime Minister Julia Gillard with former Australian Greens leader Bob Brown in 2010 has been shared hundreds of times in multiple posts on Facebook alongside a claim that the coalition government at the time signed a law called the “Native Forest Protection Act,” which defunded “national park rangers and control burn programs.” The posts are misleading; the Native Forest Protection Bill was never passed into law in Australia.

The post reads: “So who’s really to blame here? In 2010 Bob Brown led the Australian Greens with the ALP which allowed Prime Minister Julia Gillard to form government. As a result of this the Greens gained the balance of power and signed the Native Forest Protection Act, which defunded National Park Rangers and Control Burn Programs.” 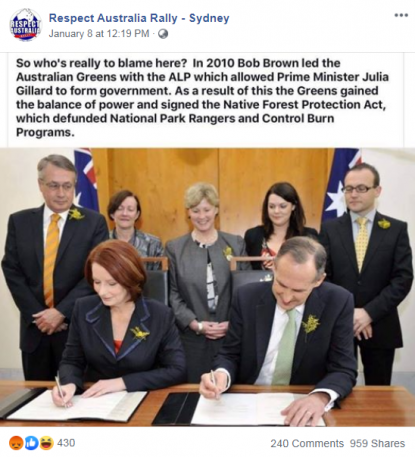 The posts are misleading; it is true that Gillard’s Australian Labor Party (ALP) formed a coalition government with the Greens in 2010, but the government did not -- and has never -- passed a law called the Native Forest Protection Act.

Following a federal election in 2010 that resulted in a hung parliament, the ALP and the Greens signed a parliamentary agreement that allowed Gillard to form and maintain a government.

The photo in the misleading post, which was taken by an Australian Associated Press photographer, shows the agreement being signed on September 1, 2010 in Canberra, Australia's capital.

Below is a screenshot of the photo on the AAP website: 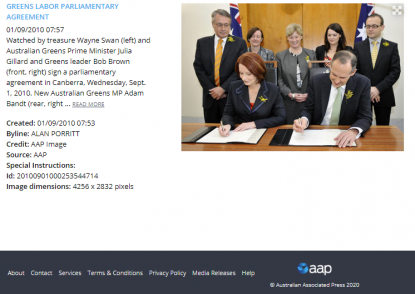 The photo was also published in this ABC News report on the deal.

A search for “Native Forest Protection” on the Federal Register of Legislation, a database of Australian laws, produces no results. The purported law also does not appear in the alphabetical list of Acts currently in force, no longer in force or as made.

A search on the Parliament of Australia’s website found the “Native Forest Protection Bill” was introduced in Parliament in 1996 but was never passed into law.

The bill did not propose any cuts to national park rangers or control burn programs.