A video has been viewed tens of thousands of times in multiple Facebook posts that claim it shows Iranian missiles targeting US military bases in Iraq. The claim is false; the video is a compilation of two earlier events from other countries -- a rocket attack on the Israeli city of Ashkelon in 2018 and an explosion in the Chinese city of Tianjin in 2015.

Below is a screenshot of the video in the misleading posts: 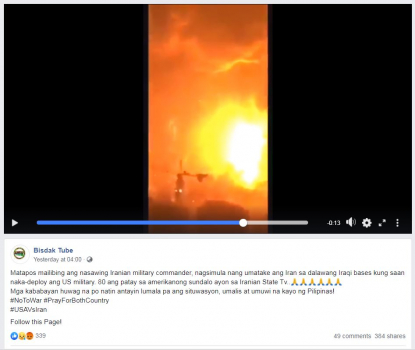 The video is a montage of two clips: the first 26-second clip shows specks of light exploding in the air; the second 23-second clip shows flames and massive plumes of smoke in an apparent explosion. The video ends with the text: “Pray for both country / no to world war!”

The post’s Tagalog-language caption translates to English as: "After the dead Iranian military commander was buried, Iran has started attacking two Iraqi bases where US military is deployed. 80 american soldiers are dead according to Iranian State Tv.. / Fellow Filipinos don't wait for the situation to worsen, leave and go home to the Philippines! / #NoToWar #PrayForBothCountry / #USAVsIran / Follow this Page!"

The same video was shared here with a similar claim in Sinhala-language.

The videos were shared after Iran fired retaliatory strikes towards two Iraqi military bases that house US troops on January 8, 2020, in response to the US killing of Iranian top military commander Qasem Soleimani in a droke strike on January 3, 2020, as reported by AFP here.

The US Department of State has since confirmed that there were no American casualties in the Iranian strikes on Iraqi bases.

The claim in the misleading posts is false. Reverse image search of keyframes extracted from the clip using the digital verification tool InVID found it was created from two separate clips of different incidents in Israel and China.

The first 26 seconds of the video in the misleading posts corresponded with a video published in this report by English-language Israeli newspaper The Times of Israel about bombings in Ashkelon, a coastal city near Gaza, on November 13, 2018.

The video has been embedded below.

The report reads in part: “The rocket attacks, which began with several large barrages on small towns near the Gaza border in the afternoon, have threatened to ratchet up tensions in the restive region, casting a shadow over intensive ceasefire efforts.”

Below is a screenshot comparison of the video in the misleading post (L) and the video embedded in the 2018 report by The Times of Israel (R):

The second part of the video in the misleading posts was published in this report by UK newspaper The Guardian about an explosion in Tianjin, a port city in northeastern China, published on August 15, 2015.

Below is a screenshot of the video in The Guardian report, credited to eyewitness Dan Van Duren: The Guardian’s caption reads: “A video filmed by stunned eyewitness, Dan Van Duren, captures the moment successive huge blasts tore through an industrial area in the Chinese port city of Tianjin on Wednesday. The explosions took place where toxic chemicals and gas were stored, and killed at least 55 people, including firefighters. The blasts were so large they were seen by satellites in space / WARNING: this video contains explicit language”.

The explicit language heard in The Guardian’s video also matches the audio of the video in the misleading post.

Below is a screenshot comparison video in the misleading post (L) and the video embedded in the 2018 report by The Guardian (R):

The same incident was also reported by the BBC on its YouTube page here, with the headline: “Tianjin explosion video captures fear of eyewitnesses”.