This limited-edition bottled water was on sale until March 2019, before the Hong Kong protests erupted in June

Images of a water bottle, which has a Chinese-language ambigram that means both “success” and “add oil”, and a message supporting Hong Kong students printed on its label, have been shared thousands of times in multiple posts on Facebook, Twitter and Weibo. The photos have been shared alongside a claim accusing Hong Kong water company Watsons Water, as well as the founder of its parent company, property tycoon Li Ka-shing, for supporting students who participated in the 2019 pro-democracy protests. The images have been shared in a misleading context; Watsons Water confirmed the bottled water belonged to one of its limited-edition runs that was on the market between May 2018 and March 2019, before the pro-democracy protests began in June 2019.

These side-by-side photos have been shared more than 2,500 times after being published on Facebook on December 17, 2019.

The photos purport to show a water bottle from different angles. The image on the left shows the Chinese characters for “success” at the top of the label being circled in red, and those for “in exchange for limited edition prize” and “cheer Hong Kong students on” at the bottom being circled in orange.

The image on the right shows another side of the label featuring the logo of Watsons Water, a Hong Kong water company owned by Hong Kong tycoon Li Ka-shing's conglomerate CK Hutchison Holdings.

The traditional Chinese-language caption translates to English as: “[Li Ka-shing cheers students on]

The Chinese characters for “success”, when flipped 180 degree, can be read as “add oil”, which according to this Oxford English Dictionary definition, is a common Chinese expression used to show encouragement. 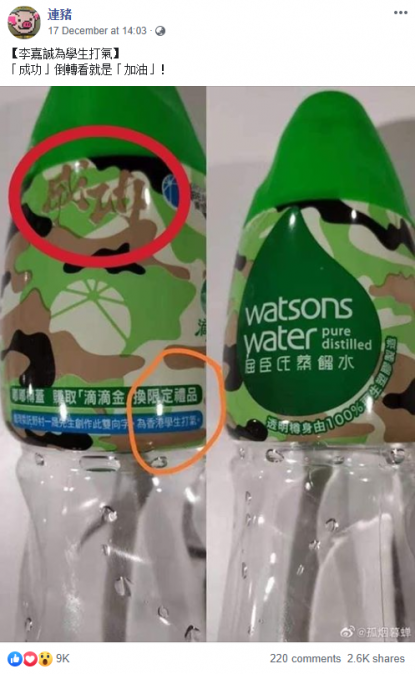 The images have been shared in a misleading context; Watsons Water has confirmed the photos show a limited-edition bottled water that was on the market between May 2018 and March 2019 -- before the pro-democracy protests began in Hong Kong in June 2019.

The photos in the misleading posts show traditional Chinese-language text highlighted in blue at the bottom of the label.

Issei Nomura is a Japanese artist specialised in ambigrams, which are words or phrases that carry more than one meaning when viewed from different angles.

Reverse image and keyword searches on Google led to this Facebook post published by Watsons Water on May 16, 2018.

The seven-second clip in the post shows an identical bottled water with a camouflage label, in either blue or green, as well as a message at the end that states: “Watsons Water joins hands with Beacon College to cheer Hong Kong students on!”

The traditional Chinese-language caption of the post translates to English as: “[Add oil, always! Succeed and break boundary!]

“It’s definitely not easy to be a student in Hong Kong, so Watsons Water has joined hands with Beacon College to roll out a brand new packaging design for our bottled water and cheer you on!

“The packaging includes an ambigram created by Japanese artist Issei Nomura. Turning the bottle upside down, the characters for ‘success’ become ‘add oil’!

“We hope all Hong Kong students can carry the same spirit, add oil, break boundary, work towards your dream!” 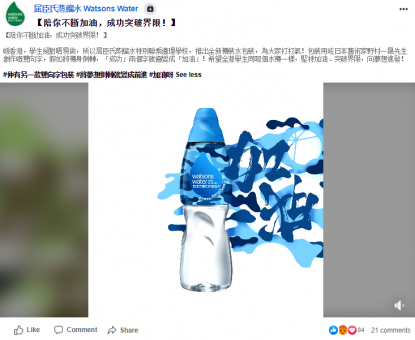 AFP found the same video in this Beacon College Facebook post also published on May 16, 2019, alongside a similar caption.

The caption translates to English as: “An ambigram of ‘add oil’ - ‘success’ was produced at the request of Beacon College, and in collaboration with Watsons Water. It seems that they are already sold in store. Amazing!”

Watsons Water issued a clarification regarding the packaging issue in this Weibo post on December 17, 2019.

The post’s simplified Chinese caption, translated to English, states: “It has come to our attention that there is a misunderstanding over the 2018 packaging design of Watsons Water. The design was part of a one-off, limited-edition run only available in Hong Kong, China, in 2018.

“We hereby reiterate that the design and promotion were part of a 2018 marketing campaign, which ended in March 2019. The idea behind the design was to encourage students who were facing exams and to help them relieve stress. We hope relevant individuals and platforms would stop spreading untrue remarks.”

An image of a statement that carries the same message was also included in the Weibo post, as seen in the screenshot below: 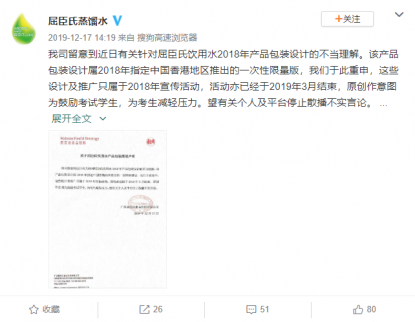 In addition, Watsons Water stated in this Facebook comment on December 17, 2019, that the bottle design was created for students who were going to take the Hong Kong Diploma of Secondary Education Examination (HKDSE), the city’s university entrance examination.

The traditional Chinese-language caption translates to English states: “Thank you for your inquiry. This design for our bottled water was rolled out in May 2018 in support of HKDSE students. It belonged to a one-off, limited-edition run.

“These designs, pictures and promotional materials were part of a 2018 marketing campaign, which ended in March 2019. Thanks again for your support.” 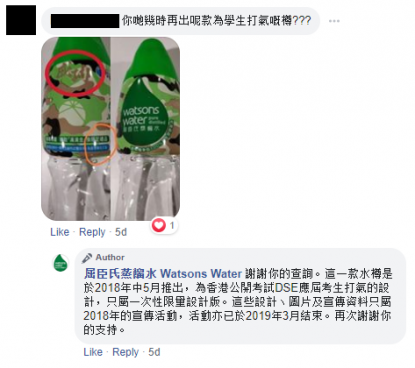 Young people, many still in school, form the vast majority of Hong Kong’s pro-democracy protesters, according to this August 2019 AFP report.

Statistics published by the Hong Kong government here on December 4, 2019, show 66 percent of the people arrested in connection to the protests between June 9 and November 30, 2019, were aged between 18 and 30.

The government press release states in part: “As at November 21, the Police arrested a total of 5 856 persons, aged between 11 and 83.

Below is a screenshot of the relevant statistics, circled in red by AFP: 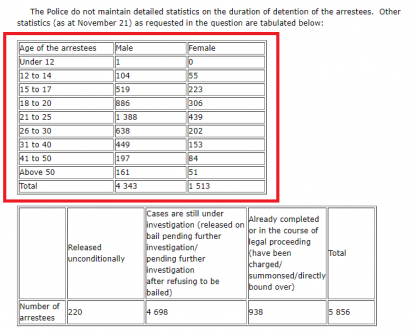 Screenshot of the relevant statistics, circled in red by AFP