There is no proof this girl is a kidnap victim

A picture purporting to show a young kidnap victim who managed to  escape her abductors was published on various social media accounts  in 2018 and 2019 - including a Facebook post shared more than 240,000 times. However, AFP established the  image was taken at the site of a gas explosion in Accra, Ghana, in 2017, with police confirming there was no proof of the kidnapping claim. 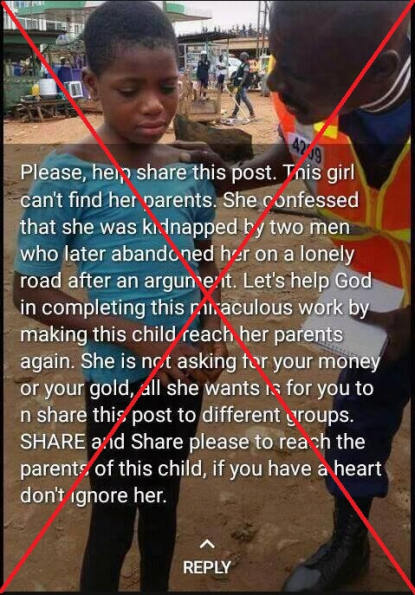 The posts were published on accounts registered in South Africa, Uganda and the United States, all using the same picture and making the identical claim.

AFP googled the text and found the same picture elsewhere with a wider angle. Using the magnifier function on InVID, an online image and video verification tool, we were able to pick up the words “Benab House” on the distinctive green building in the top left corner. 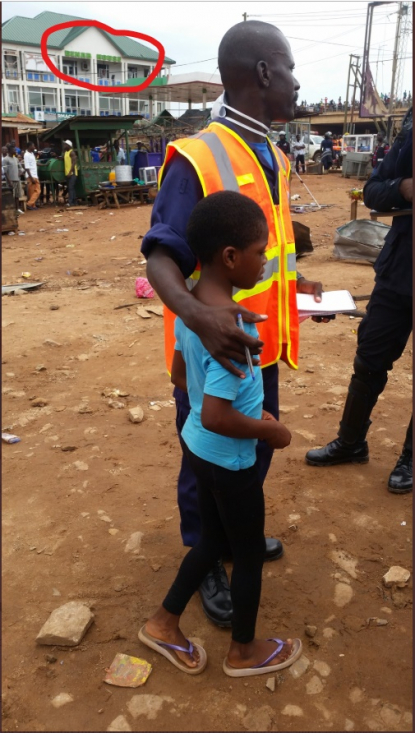 The name of the building in the background, Benab House, is circled in red

A search on Benab House using Google Maps identified the area as Atomic Junction in Accra, the capital of Ghana.

In the screengrab below, using Google Maps, AFP matched the numbered markers to the same identifying features in the girl’s pictures: 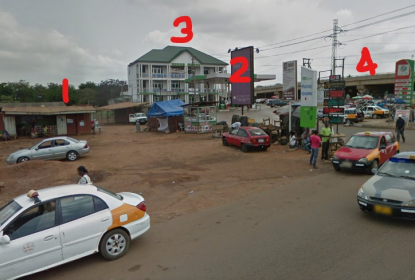 1. A tin shack with a number underneath the overhang;

2. The fuelling station with green trim on the forecourt roof;

4. The overpass in the background.

Another Google text search including the phrase  “Atomic Junction” returned a number of stories and pictures referring to a gas explosion on October 7, 2017 across the road from Benab House. This was AFP’s story of the disaster, with pictures below. 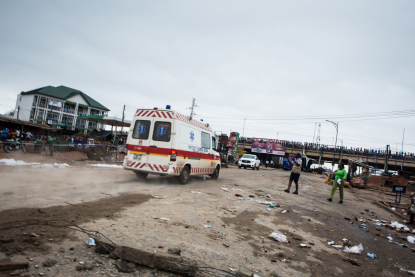 An ambulance drives near the site of an explosion in Accra on October 8, 2017 a day after a gas tanker caught fire, triggering explosions at two fuel stations. - At least three people were killed and dozens injured after a tanker truck carrying natural gas caught fire in Ghana's capital, Accra, triggering explosions at two fuel stations, emergency services said on October 8, 2017. (AFP / Ruth Mcdowall) 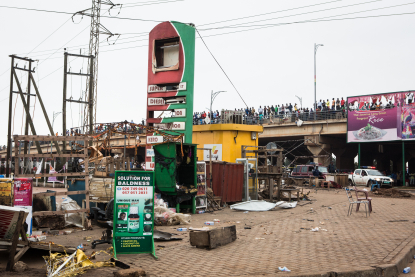 People on a bridge gather to look at the site of an explosion in Accra on October 8, 2017 a day after a gas tanker caught fire, triggering explosions at two fuel stations. - At least three people were killed and dozens injured after a tanker truck carrying natural gas caught fire in Ghana's capital, Accra, triggering explosions at two fuel stations, emergency services said on October 8, 2017. (AFP / Ruth Mcdowall)

Based on the new information, a Facebook search then produced  a list of posts under the hashtag #LivefromAtomic, some with original pictures of the little girl, like these here, here, here and here.

Dated the day after the explosion, none of these posts make mention of the girl being kidnapped, unlike those that followed a year later. According to the tweet below from a Ghana media company, the girl was called Maame and could not find her parents. AFP has been  unable to verify the girl’s name or fate.

If you have any information about the girl, you can contact us here.

“This picture was taken at the Atomic Junction in Madina, Accra during the gas station explosion. That's one of our men on the ground gathering information... after the tragedy. I'm not privy to enough information about the little girl, but I believe she might have lost a caretaker or might be around the place when the incident happened," she told AFP.

Fact checking editor for southern Africa
All posts
Next post

No, Japanese children are not healthier because vaccines are not mandatory in their country

No, these men did not receive money to burn down Ethiopian churches