No, Canada is not sending funds to Hamas

A recurring claim that Canada’s Liberal government funds the Palestinian militant group Hamas has resurfaced in the wake of rocket attacks on southern Israel. The posts suggest that $50 million sent to Hamas was used to fund attacks on Israel. This is false: in 2016-2017, Canada did provide just over Can$50 million in assistance for the West Bank and Gaza, but none of it went to Hamas, which is on Canada’s list of recognized terrorist organizations.

A November 13 Facebook post states that the Trudeau government gave $50 million to Hamas, which was then used to fund the launch of missiles on Israel. 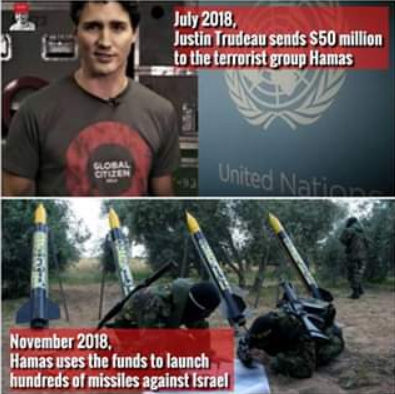 The Canadian government does not fund Hamas. The militant Palestinian group is listed as a “radical Islamist-nationalist terrorist organization” on Canada’s list of terrorist entities.

Indeed, in 2016-2017, Global Affairs Canada, the government agency in charge of foreign aid, granted Can$38.76 million in bilateral assistance and Can$12.13 million in multilateral assistance to the West Bank and Gaza. This total of just over Can$50 million is presumably the one referred to in the false post. However, none of those funds directly benefit Hamas.

On October 12, 2018, Marie-Claude Bibeau, Minister of International Development, announced Can$50 in funding for Palestinian refugees over the next two years. It will support, among other things, efforts “to send hundreds of thousands of children to school, train teachers and support over a hundred health clinics,” according to a press release.