No, this is not a Hindu temple discovered after a mosque was demolished in India

A Facebook post claims to show a Hindu temple in India that was discovered after a mosque was demolished. The image in the post purporting to show the temple is manipulated from an original of a cave in China that is famous for Buddhist art.

The post, shared on a Facebook page titled ‘Resurging Dharma’, purports to show the temple in the southern Indian state of Karnataka that it says was discovered after a mosque was demolished to make way for a road.

The photo, posted on November 13, 2018, has a caption that reads: “When a mosque was demolished in Raichur in Karnataka for widening road they have found this Hindu temple. We need to demolish all mosques.”

The photograph has been edited from an image of the UNESCO World Heritage-listed Longmen Grottoes, or Longmen Caves, in China’s Henan province.

In the Longmen Caves, the statues of Buddha and his disciples are carved out of stone.

Below is the misleading photo (left) and one of the Longmen Caves (right) sourced from WikiMedia commons that was published in 2016. AFP has circled three features in both images that are the same. 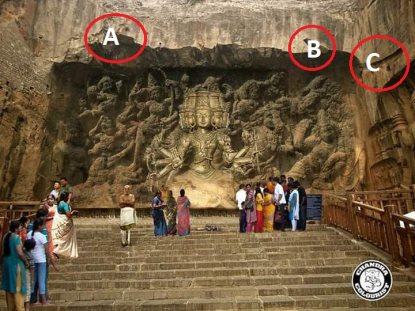 Snapshot of the misleading photo 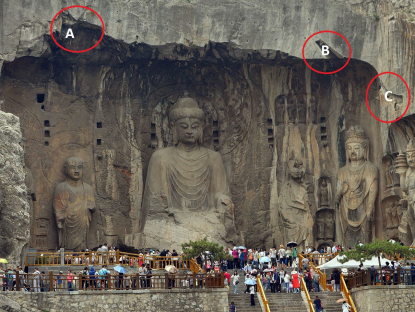 Snapshot of the original photo

Many other photos of the Longmen Caves are available online showing the same features, including on UNESCO's  website.

An analysis of the photo in the misleading post also reveals it to be manipulated. A man marked as ‘D’ in the photo below has one leg missing and is standing without any support on the stairs. 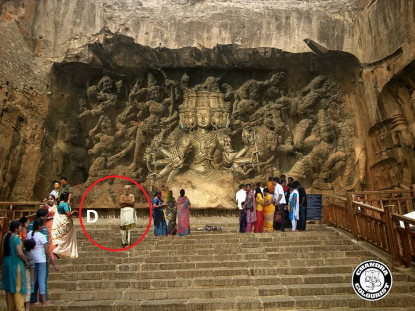 There is also a logo in the bottom right hand corner of the photograph that reads: ‘Chandra Colourist’.

There is a Facebook page with an identity of Chandra Colourist that posted the manipulated image in 2016 with a comment stating it was a digital creation.