Various articles -- most recently, in Kenya -- have claimed that the World Health Organization (WHO) is planning to redefine infertility to include people who are unable to find a partner. Reports that the WHO was widening its definition of infertility have been in circulation since 2016. But the UN agency refuted the reports when they first emerged in 2016, and WHO officials told AFP there are no plans to change the definition.

One article published on the website of Kenyan newspaper The Star, which we’ve archived here, used the headline: “Inability to find a sexual partner is a disability - WHO”. The article, published on June 8, has been shared more than 700 times on Facebook.

“In addition, failure to get pregnant after 12 months or more of regular unprotected sex will be considered a disability and not infertility as before,” the post reads. 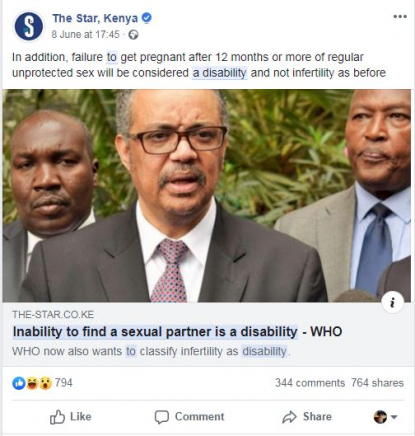 Screenshot of The Star's article, as posted on Facebook

Another Kenyan website, Tuko, published similar claims, while the popular Kenyan radio station Hot 96 FM hosted a conversation around the topic last year and posted it on its Youtube channel, gaining more than 8,000 views.

The recent Kenyan articles follow an earlier wave of reports in 2016 that the WHO was planning on updating its definition of infertility in order to grant everyone the “right to reproduce”. Many of the reports, including articles which we’ve archived here and here, cited a piece published on October 20, 2016 by Britain’s Telegraph newspaper.

A video carrying the claims, which named US tech site Gizmodo as the source, was viewed over 100,000 times. Gizmodo had in turn cited the Telegraph.

According to the Telegraph, which quoted “one of the authors of the new standards”, Dr David Adamson, the new definitions which were supposedly in the works at the time would have proclaimed equal rights for gay and single people to start a family.

“Under the new terms, heterosexual single men and women, and gay men and  women who want to have children would be given the same priority as couples seeking IVF because of medical fertility problems,” the Telegraph reported.

However, a day after the Telegraph article was published, the WHO published a statement which said that its definition of infertility remained the same and that there were no plans to change it.

“WHO is not planning to make any changes to the definition on infertility,” the statement said.

The WHO also tweeted the statement directly in response to a post that linked to the Telegraph article.

Our definition of #infertility remains the same https://t.co/fbkyxzWocd

However, the clarification from the WHO attracted little attention, and in the days that followed other outlets continued to report that the health agency was planning on changing its definition.

We reached out to Dr David Adamson, the fertility expert cited by the Telegraph, about the comments attributed to him in the newspaper’s 2016 article.

“Some of the statements in the article are the result of misunderstanding, misinterpretation, conflation of statements, statements taken out of context or without accompanying qualifications,” he told AFP in an email.

“While I commented that the definition being considered created the potential for impacting individual, societal and legal aspects of reproductive rights, I was very clear in stating this was not the accepted WHO definition or policy in 2016. It is not now either. Unfortunately, this fact was not clearly stated in the article.”

In a statement to AFP, the Daily Telegraph stressed that their article had never suggested that the new guidelines had already been “changed and adopted as WHO policy”.

“The basis of our article was information given to our journalist, in company with two others, during two interviews conducted with Dr Adamson in person,” the statement said.

“The WHO was contacted before publication for comment, but it offered none. We stand by our report of what Dr Adamson told us, the accuracy of which we note he does not dispute.”

Neither Adamson nor the WHO had ever complained about the report directly to them, the newspaper added.

Three years later, the WHO still hasn’t changed its definition of fertility

It’s still not entirely clear where the mix-up came from, or why the WHO did not reach out directly to the Telegraph if there was a problem with the report.

However, WHO communications officer Tarik Jašarević told AFP via email that the UN agency had no current plans to update its definition of infertility.

“We are not updating any definition,”  Jašarević said, directing us to the statement issued back in October 2016.

The WHO continues to define infertility as “a disease of the reproductive system defined by the failure to achieve a clinical pregnancy after 12 months or more of regular unprotected sexual intercourse”.

Does the WHO view infertility as a disability?

Some of the articles published since 2016 have concluded that under the new guidelines the WHO was supposedly preparing to introduce, someone who was unable to find a partner would be considered to have a disability.

This conclusion was based on the idea that the WHO has in the past considered infertility to be a form of disability.

However, Rudi Eggers, the WHO's representative in Kenya, said this idea came from an old policy document which was released in 2011 and is no longer available online.

“Although infertility is an impairment of biological function, WHO does not classify infertility as a disability, since disability is neither simply a biological nor a social phenomenon,” Dr Eggers told AFP in an email.

He too confirmed that the WHO had no plans to change the definition of fertility.

Reports claiming that the definition is about to change, or that people who can’t find a partner are about to be classified as having a disability, are incorrect.