A video seen by hundreds of thousands of people on Facebook claims to show Nigerian senator Remi Tinubu hitting a man at the national assembly. This is false; the video shows a brawl between People’s Democratic Party (PDP) lawmakers at Nigeria’s house of representatives in 2013.

The video, archived here, was posted on Facebook by Nigeriancitizens.com, with the caption “Remi Tinubu Fights A Senator”. It has been shared over 14,000 times and seen more than 400,000 times. 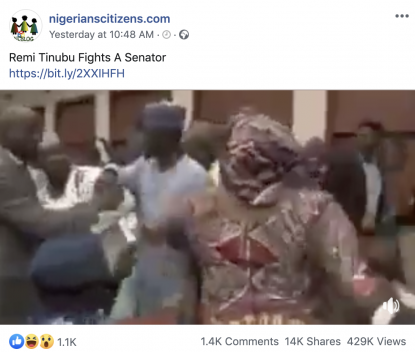 A screenshot of the misleading Facebook video, taken on July 11, 2019

The same video was also posted by a Facebook user, Baron Lurge, archived here. In accompanying text the user wrote that Tinubu “lacks moral right” to be on a panel investigating fellow senator Elisha Abbo over an alleged assault on a woman in a sex shop.

“We all keep talking about that good for nothing young senator Abbo who slapped that lady but we also forgot about Tinubu's Wife fighting and abusive nature,” the user wrote.

Tinubu -- wife of ruling All Progressives Congress party national leader Bola Tinubu --  is the only woman on a committee set up by the senate president to investigate the high-profile case involving lawmaker Abbo.

Footage circulated earlier this month showed Abbo repeatedly slapping a women in a sex toy shop. Abbo has since been charged with assault by the police. He pleads not guilty, but has apologised to the woman and to the country over the incident.

During the first sitting of the committee, Abbo and Tinubu were involved in a heated argument over the conduct of the investigation. You can see a video of the hearing here.

The video has been miscaptioned

Playing on the exchange between both senators, this video was shared with claims that it shows Tinubu fighting another senator.

We ran Google and YouTube queries on lawmakers fighting in Nigeria, and we found this video, shot by Channels TV and circulated by AFP, from 2013, showing Nigerian lawmakers in the lower house exchanging blows over the presence in parliament of a splinter group of the PDP.

The video shows the lower house, which Tinubu has never been a part of. It also shows a clash between PDP lawmakers. This isn’t her party -- Tinubu was a founding member of the rival APC.

Local media reported at the time that this was a clash between factions of the PDP, and the woman in question was Binta Masi Garba, the leader of the Abubakar Baraje faction of the PDP. A longer report on the incident including the same footage can be seen here.

Tinubu was elected to the upper chamber of the Nigerian national assembly in 2011, and was re-elected in 2015 and 2019, becoming the first woman to serve three terms in the Nigerian senate.

This bus crash happened in Indonesia, not Malaysia