A meme shared in North America shows two photos of women wearing anti-vaccine t-shirts, alongside a statement from a nurse warning of the dangers of shots. The meme is misleading. One of the photos is doctored; the original shows real health workers who wore t-shirts featuring pro-vaccine slogans. There is no evidence of a Registered Nurse named Gayle Gregg in Canada or the United States  and at least two of the women in the second photo work in fields unrelated to the public health system.

A Facebook post featuring two photos of two different groups of women wearing t-shirts bearing anti-vaccine slogans such as “vaccines cause infertility,” “vaccines cause death,” or “vaccines cause seizures,” was shared hundreds of times in July 2019. “Nurses keeping it real,” one Facebook user wrote, suggesting that the women in both photos work in the health sector.

The photos are captioned with a statement signed “Gayle Gregg, RN” (for Registered Nurse), a self-proclaimed hospital nurse with 25 years of experience. According to the quote, “Brilliant nurses in the profession for 20+ years are changing their views on vaccines.” 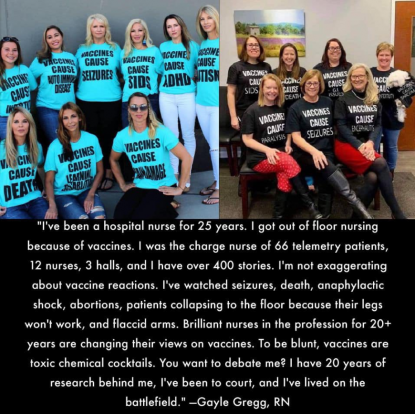 However, the meme misleads in several ways.

Some of the women on the top right photo are indeed nurses, but a reverse image search quickly reveals that in the original photo, the women are wearing t-shirts with the slogan, “Vaccines cause adults.”

The photo was posted on February 13, 2019, on the Facebook page of Legacy Pediatrics, a clinic in Rochester, in New York state. 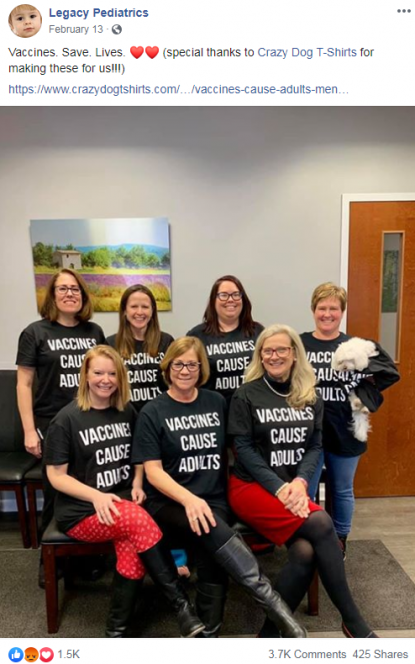 “I saw a meme online that had the statement ‘Vaccine cause adults’ and I loved it,” Kate Shand, pictured on the bottom right of the photo, told AFP about why she organized the photo. The post gathered a lot of attention, including from the media, and from anti-vaccine Facebook users. Canadian Prime Minister Justin Trudeau also posed with the same t-shirt a few months later.

“We were a little bit afraid at first because of all the awful things posted on our page and then we realized that this is not real life, we knew that they would burn themselves out on our (Facebook) page and we chose to just let it ride,” Shand added.

The top left photo in the meme does not appear to be doctored. The oldest publication date AFP identified with it is a reddit thread from June 2018 mocking the women in the photo. Several Twitter accounts that regularly post content critical of vaccines currently use the photo as a header image. Rita Palmer, a New York State activist fighting the repeal of religious exemption for vaccination of children in the state of New York, is one of them.

She told AFP Fact Check that although she does not know who the women in the photo are, she believes that the context of the photo was a reaction to the “Vaccines cause adults” t-shirts. “I just thought it was so clever, and such a good answer back,” she said.

AFP Fact Check was able to identify two of the women in the photo, both from the Saint Petersburg area in Florida. According to their profiles on the professional networking social media site LinkedIn, they do not work as nurses but as an accountant and a senior partner at an alternative health company. AFP Fact Check reached out to both for comment but received no answer by the time of publication.

Screenshot of a search result on Nursys

Dawn Kappel, director of communications for the National Council of State Boards of Nursing, a nonprofit organization that runs Nursys using continuously updated data from each state board of nursing, told AFP, “If you can’t find it in the database, they’re probably not a licensed nurse in the United States.”

A search in the nurse registries for each of Canada’s 13 provinces and territories for a Registered Nurse named Gayle Gregg also came up empty, from Ontario’s College of Nurses to the Northwest Territories and Nunavut’s Registered Nurses Association.

People with questions on vaccine safety in Canada can consult this Health Canada website. Concerned readers in the United States can refer to this web page from the Centers for Disease Control and Prevention.