No, the Australian government did not announce a $146 million plan to ‘train up Vietnamese meat workers’

A post shared thousands of times on Facebook and Twitter claims the government of former Australian Prime Minister Malcolm Turnbull announced a $146 million, or USD101 million, plan to train Vietnamese abattoir workers. The claim is false; Australia offered $146 million in aid to Vietnam to help train its workforce, not just its meat workers.

The misleading post has been shared more than 9,400 times after it was posted here by the Facebook page of the Australasian Meat Industry Employees’ Union on April 17, 2018.

The post combines a photo of Minister for Agriculture and Water Resources, David Littleproud, with text that says: “$146 MILLION TO TRAIN UP VIETNAMESE MEAT WORKERS”. 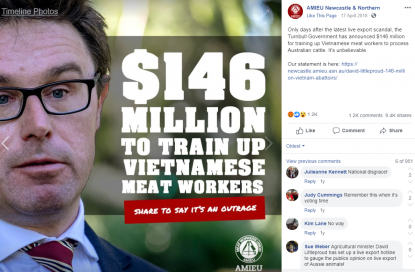 It resurfaced on Facebook this year, for example here on April 19, 2019.

The misleading posts end with a link to this statement from the Australasian Meat Industry Employees’ Union.

The statement, dated April 12, 2018, says, in part: “Only days after holding a series of press conferences in which he promised to investigate the latest, horrific live export scandal where hundreds of sheep lost their lives, Agriculture Minister David Littleproud has jetted off to Vietnam to announce that $146 million in public money will be used to help support the live export industry.”

The “live export scandal” refers to this report on Nine Network’s news and current affairs programme 60 minutes, which in early April 2018 aired footage from a vessel crew member that shows Australian sheep in transit living in cramped and overheated conditions.

The claim is false; Australia is providing $146 million in funding to Vietnam for the period of 2016-2020 through its Aus4Skills program, but the money is to be allocated to various functions, such as the upskilling of human resources and audit employees, training for vocational graduates, not just for the training of abattoir workers.

Below is a screenshot of the Aus4Skills fact sheet: 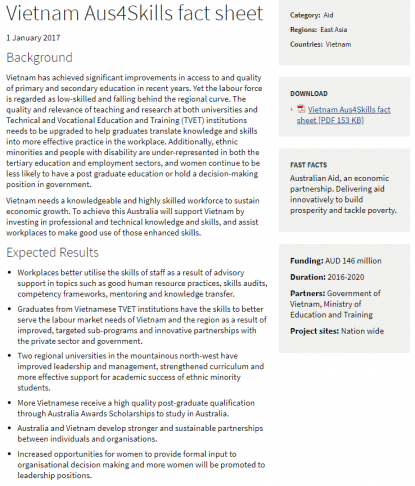 Australia will provide some $950,000 AUD from 2018-2019 to improve Vietnamese abattoirs, according to this statement by the Department of Agriculture and Water Resources.

MATES is a reference to the Managing Abattoir, Training and Exchange of Skills programme, which was announced here in a March 13, 2018, statement by Agriculture Minister David Littleproud.

“The MATES program, funded by Australia, will improve key integrity aspects of the live export supply chain in Vietnam and to modernise the supply chain from production to distribution.

“It will also assist industry to meet consumer expectations when it comes to food quality and safety,” the minister said.

The programme is part of the Department of Foreign Affairs and Trade’s Aus4Skills initiative detailed here.

No, this is not a video of a woman hitting an Indian ruling party lawmaker with a shoe