A video has been viewed hundreds of thousands of times in Facebook posts which claim that more than 70 children died after being vaccinated for polio in Pakistan in April 2019. The claim is false; the footage in the misleading posts is a clip from a 2017 television programme.

The misleading post's Urdu-language caption translates to English as: "Children are being given poison in the shape of polio vaccination. Today in Peshawar more than 70 children died and at least another 700 were affected."

Peshawar is a city in northwestern Pakistan. 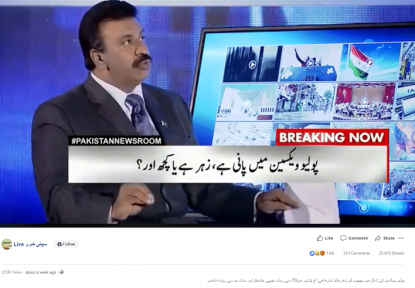 The same video appears alongside similar claims shared elsewhere on Facebook in April 2019, for example here and here.

The Urdu-language banner pictured at the beginning of the video translates to English as: "Is there water, poison or something else in polio vaccine?" The text above the banner states: "Breaking Now".

The video in the misleading posts is actually a clip from a 2017 television report about polio vaccinations in Pakistan.

The misleading video contains a banner with the words "#PakistanNewsRoom". This refers to a programme named Pakistan News Room, which is broadcast by BOL Network, a Pakistani news company. This is the company’s official website.

The exact same footage was published here on YouTube on April 13, 2017.

Below are screenshot comparisons of the video in the misleading post (L) and the YouTube video (R): 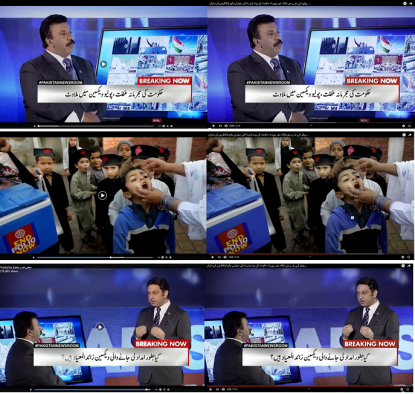 A journalist in AFP’s Islamabad bureau analysed the 2017 video and found it contained no reference to children dying in Pakistan after being vaccinated for polio.

The original report discusses whether polio vaccines in Pakistan are properly tested before they are distributed.

“Polio vaccine which is being given to our millions of children, there is no testing done on it and there is no information on which ingredients are added to it,” one of the presenters says in the programme’s introduction.

Hisham Inamullah, the health minister for northwestern Khyber-Pakhtunkhwa province of which Peshawar is the capital, said that no children had died in April after being vaccinated for polio.

“No child has died nor has been affected after taking polio vaccine,” Inamullah told AFP in a face-to-face interview on April 22, 2019.

This is an AFP report published on April 27, 2019, about recent attacks on anti-polio vaccinators in Pakistan.