No, this is not a genuine photo of a Philippine senatorial candidate holding a stolen marker pen after voting in the election

An image has been shared tens of thousands of times in multiple posts on Facebook, Reddit and Twitter alongside a claim it shows a Philippine senatorial candidate holding a marker pen he stole after voting in the country's election. The claim is false; the image has been doctored from a photo in which he was not holding a pen. 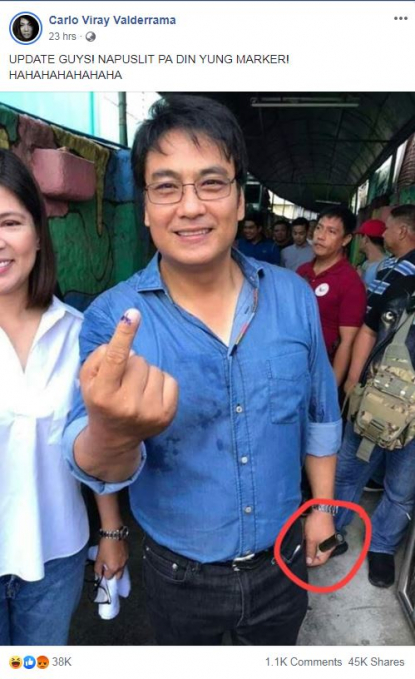 The caption translates to English as: “UPDATE GUYS! HE WAS EVEN ABLE TO SNEAKILY STEAL THE MARKER! HAHAHAHAHAHAHA”.

The man pictured in the photograph is Philippine senatorial candidate Ramon 'Bong' Revilla Jr. This is his official website.

“Sneakily stealing” is a reference to a recent case in which Revilla was charged with plunder but later acquitted. This document published by the anti-graft court states he was acquitted of plunder on December 7, 2018.

The ruling stated that the accused in the case must return 124.5 million pesos ($2.4 million) in public funds. Revilla’s legal counsel stated in a press release published here on January 31, 2019, that he does not intend to return the money.

The misleading Facebook post was published on the same day that Filipinos went to the polls in midterm elections. Here is an AFP story about the elections.

Revilla was a senatorial candidate for the political party Lakas Christian Muslim Democrats. He appears as senator #16 in this list published by the Philippines Commission on Elections.

The claim is false; the image has been doctored from a photo in which Revilla was not holding a marker pen.

A search of social media posts about Revilla using online search tool IntelTechniques found the photo was originally published here in a Facebook post by Rex Remitio, a correspondent for CNN Philippines. 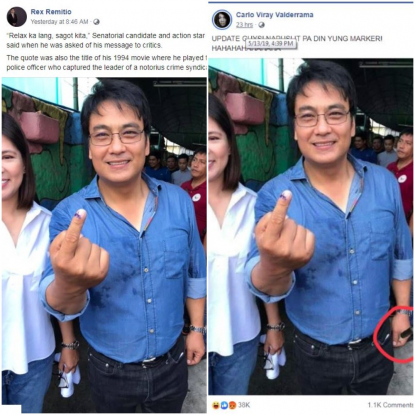 Comments published below the misleading post indicate some people believed the image was genuine.

The comment below translates to English as: “It's just a marker but he did not even let it go, he still stole it hmmm”.

The comment below translates to English as: “Hahaha it's just a marker but he even stole it”.

But some commenters recognised the image in the misleading post had been doctored.

The comment below translates to English as: “Hahaha this is funny but it's just edited… there's really a picture which shows that he's not holding a marker…”