Nigeria’s ex-aviation minister Femi Fani-Kayode published on Instagram an image of a man holding what appears to be a charred baby with claims it shows victims of last weekend’s deadly attacks that supposedly killed “over 50 innocent souls” in Igangan, in Nigeria’s southern Oyo state. However, the claim is false; the image predates the violence and is actually a screenshot of a video clip filmed after a crisis in Cameroon’s northwestern town of Batibo.

The graphic image in Fani-Kayode’s Instagram post has been liked more than 2,000 times since publication on June 6, 2021, a day after unknown gunmen attacked Igangan community in southwestern Nigeria.

"Over 50 innocent souls butchered and cut to pieces in their homes by Fulani terrorists in Igangan, Oyo state yesterday and the Palace of the traditional ruler burnt to the ground,” reads Fani-Kayode’s caption on the photo, which was also published on his Facebook and Twitter accounts where the politician has nearly two million followers.

The Fulani ethnic group in northern Nigeria is known for herding cattle and moving south in search of dwindling grazing land. The nomadic herders are frequently accused of being behind a rising spate of murders and kidnappings as well as violent clashes with farmers in the south over grazing rights.

The security threats underscore the surge in inter-community tensions in recent months in some southern states.

In February 2021, for instance, clashes erupted in Oyo state’s capital Ibadan between traders from a group of Yoruba people who dominate the region and the Hausa community, who mainly hail from Nigeria's north.

While last weekend’s attacks in Igangan saw a number of fatalities, Fani-Kayode exaggerated the death toll and used an unrelated image taken in a different country.

Screenshot of a video clip

AFP Fact Check ran a Google reverse image search and found the same image in an article published in February on the website of the Cameroon-based Human Rights and Legal Research Centre.

“Cameroon: A child burnt alive in Batibo, the armed conflict hit Northwest region,” reads the headline of the publication that further states the incident occurred on February 11, 2021.

Screenshot taken on June 9, 2021, showing the article on HRLRC’s website

Keyword searches using clues from the headline found a video clip showing the same scene as the viral photo in an article on the website of Cameroon Intelligence Report, also published on February 11, 2021.

No distinguishable language is heard in the 25-second clip but AFP Fact Check found the image was screenshotted 17 seconds into the video clip, which shows the man holding the burnt baby closer with his two hands.

The online publication accuses Cameroonian security forces of being behind the act. However, in a statement relayed by local media, Cameroon's defense ministry denied any involvement while acknowledging the violent events that led to the baby’s death in Batibo.

"On Thursday, 11 February 2021, a viral video of an amateur report appeared on the blogosphere showing an adult weeping with a charred infant in his arms," reads the statement sent by the ministry to AFP Fact Check.

“The sad events of Batibo rather refer to a settling of scores between two identified terrorist criminal factions, which are causing death and disarray in the administrative regions of the North-West and South-West." 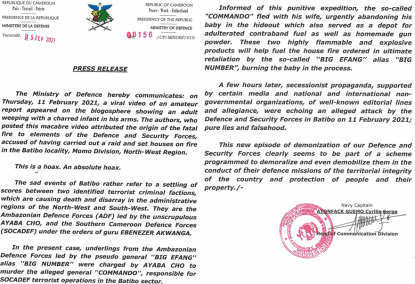 Over 50 killed in Igangan?

Fani-Kayode also claimed more than “50 innocent souls” were “butchered and cut to pieces” but there is no evidence to show the death toll in Igangan had risen to 50 at the time the claim was published.

Oyo state police spokesman Adewale Osifeso said eleven people, including some of the assailants, were confirmed to have died as of June 6, 2021, when Fani-Kayode published the claim.

Fani-Kayode is known for sharing misinformation related to politics, ethnicity and religion in Nigeria. AFP Fact Check has repeatedly debunked the politician’s posts, including footage of a religious event in Ivory Coast falsely circulated as showing members of Nigerian Islamist groups Boko Haram and the Islamic State in West Africa forcefully converting people to Islam in Nigeria’s northern Niger state.