Multiple images have circulated in Facebook and Twitter posts that claim they show a cricket match hosted by a Sri Lankan politician in June 2021 as the island nation was under Covid-19 lockdown. But these posts are misleading: the images show a cricket match that was held in March 2021, months before Sri Lanka imposed mobility restrictions to curb rising Covid-19 infections.

The Sinhala-language post translates in part as: “Minister Jeevan Thondaman holds a cricket match while the country is in lockdown.

“Holding a sports event at present when there are travel restrictions imposed countrywide, has been criticised heavily in social media.” 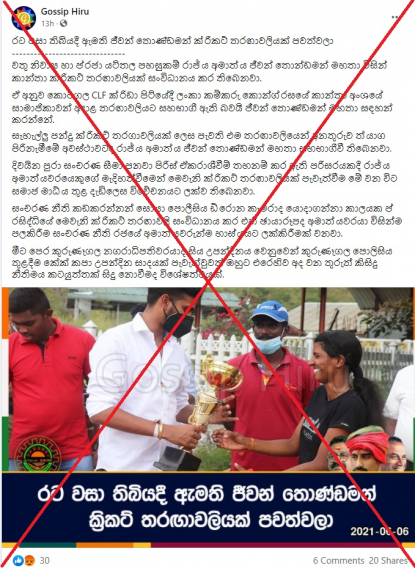 Images that appear to show the same cricket match were also shared alongside a similar claim on Facebook here and here; and on Twitter here and here.

Thondaman is the minister of housing and community infrastructure.

Sri Lanka has imposed a countrywide lockdown since May 21, 2021 to curb rising Covid-19 infections.

The images were initially captioned: “A cricket match was organised by the women's wing of the Ceylon Workers Congress at the Kotagala CLF sports ground under my patronage.”

However, this caption was updated hours later to include the hashtags: “#throwback #memories”.

“These photographs are of a sports event held on March 27, 2021 to commemorate Women’s Day,” Thondaman told AFP.

“There was no travel restriction in the country during the time and we followed all necessary health restrictions and guidelines,” he said

The images correspond to photographs published by local media organisations Welaiththalam and Karudan which reported on the cricket match in March 2021.

The Welaiththalam report published on March 29, 2021 states: “The Women's Day events of the Ceylon Workers Congress were held at the Kotagala CLV Campus Auditorium.”

Below is a set of screenshot comparisons showing the images in the misleading posts (L) and the photos published by Velaiththalam (R): 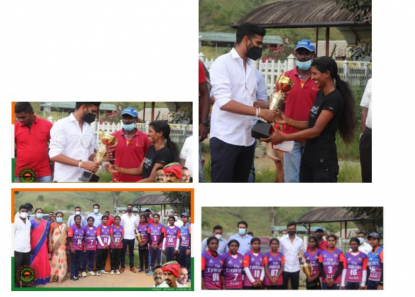