After Chinese authorities relaxed strict family planning controls in May 2021, Twitter posts shared an image of a purported government poster threatening to fine couples who use condoms "without approval". The claim is false: the image has been digitally altered from an old photo that did not contain any reference to penalties for couples using contraception.

It contains an image of a purported government advertising poster that says: “Use of condoms without approval will result in a maximum fine of 100,000 yuan”. 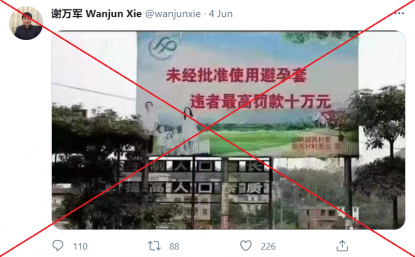 The image circulated as Chinese authorities relaxed the country’s family planning policy, from May 31, 2021, to allow families to have three children, AFP reported here.

For almost 40 years, China enforced a controversial “one-child policy” --- one of the strictest regulations worldwide. This was relaxed in 2016 to a “two-child policy” due to widespread concerns over an ageing workforce and economic stagnation, AFP has reported.

An identical image was also shared here, here, here and here on Twitter.

Some online users appeared misled by the image while others doubted it was genuine.

“So the supportive measure for the three-child policy is banning condoms,” wrote one user.

But the image has been doctored.

Reverse image and keyword searches found the original photo was published here on the website of the state-run newspaper China Daily on October 30, 2015.

This text had been digitally altered in the image shared in the misleading posts and replaced with the reference to condom use for couples.

Below is a screenshot comparison of the doctored image (L) and the original photo (R):

The unaltered photo also appears in this post by the Chinese multinational company Tencent and here on the Chinese information site mzsky.cc.