Nigerian separatist leader Nnamdi Kanu has claimed that photos showing President Muhammadu Buhari meeting his French counterpart Emmanuel Macron in Paris on May 17, 2021, were manipulated. But the claim is false: there is no evidence suggesting the images were digitally altered, and AFP photos of Macron welcoming Buhari at the Elysee Palace show they are genuine.

This and other misleading claims surfaced as President Macron hosted African heads of state including Buhari for two meetings in Paris taking place respectively on May 17 and May 18. AFP covered the events here.

Kanu, who leads the Indigenous of People of Biafra (IPOB), alleged in a Facebook post that Buhari’s team had manipulated photos to make it appear as though he had been welcomed by Macron when the meeting had not actually taken place.

His claim was published barely a day after AFP Fact Check found he had falsely alleged that Buhari had travelled to Paris to attend an already postponed conference.

To prove the supposed manipulation, Kanu compared the first three images on his post originally released by Buhari’s spokesman Femi Adesina with others showing screenshots of AFP and Reuters’ images on the website of French state-owned channel France 24.

Kanu claims that one piece of evidence that the images were “photoshopped” that a wedding band was added to Macron’s right hand - implying that he normally wears it on the left one.

He further claimed that the French president’s suit in photos released by Buhari’s press team was different from the one he wore in images published by France 24.

But these claims are false.

Buhari at the Elysee Palace

Macron welcomed African leaders for a dinner at the Elysee Palace on May 17, 2021, after they attended an international conference on Sudan.

AFP photojournalist Ludovic Marin captured the meeting between the French president and his Nigerian counterpart. 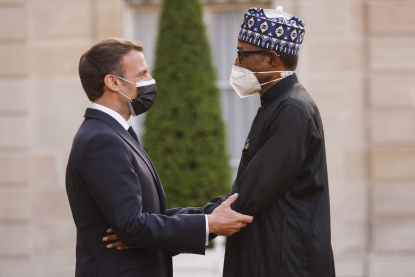 There is no evidence that the photos released by Adesina were altered to include a ring on President Macron’s right finger. Multiple images reviewed by AFP Fact Check show Macron actually wears two gold bands -- one on each hand.

Both French and international press have covered the fact that the French leader has two rings from his wife.

“One ring is his wedding band, and the other is a sentimental token from wife Brigitte,” news analysis website Quartz said in this portrait piece about Macron.

“Macron received the band as he was leaving France for a six-month internship at the French embassy in Nigeria in 2001.”

In this AFP photo with Chad’s prime minister taken on May 17, 2021, a ring can be seen on both of Macron’s hands. 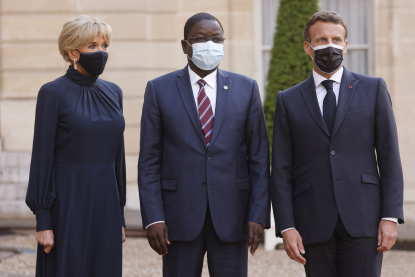 Another AFP image of  Macron and his wife, taken on the same day at the same location, also captures the two gold rings on the French leader’s hands. 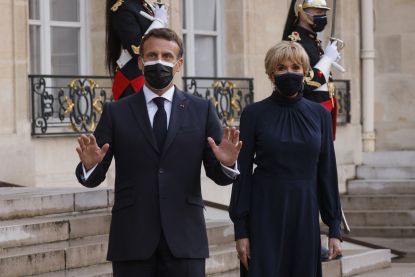 Kanu’s claim that Macron’s suit seen in screenshots taken from France 24's website was different from what he wore while welcoming President Buhari is also false.

While the colour of the photos released by Adesina was a bit more saturated, all the images accompanying Kanu’s Facebook post show the French President in the same outfit. 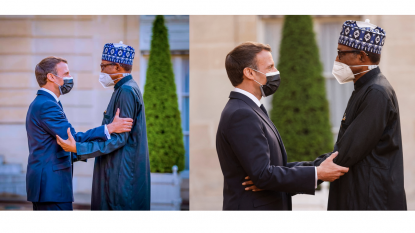 The outfits, face masks, double pockets on Macron’s suit, Buhari’s cap and glasses, and other features seen in the presidential photos match those taken by AFP and published on France 24.

The Biafra separatist group has been pushing for an independent state for the indigenous Igbo people in southeastern Nigeria since 1970.

IPOB supporters regularly share misinformation on social media to attack the country’s leadership. AFP Fact Check has previously debunked claims by Kanu, including that President Buhari is dead and that the man who took his place is lookalike.