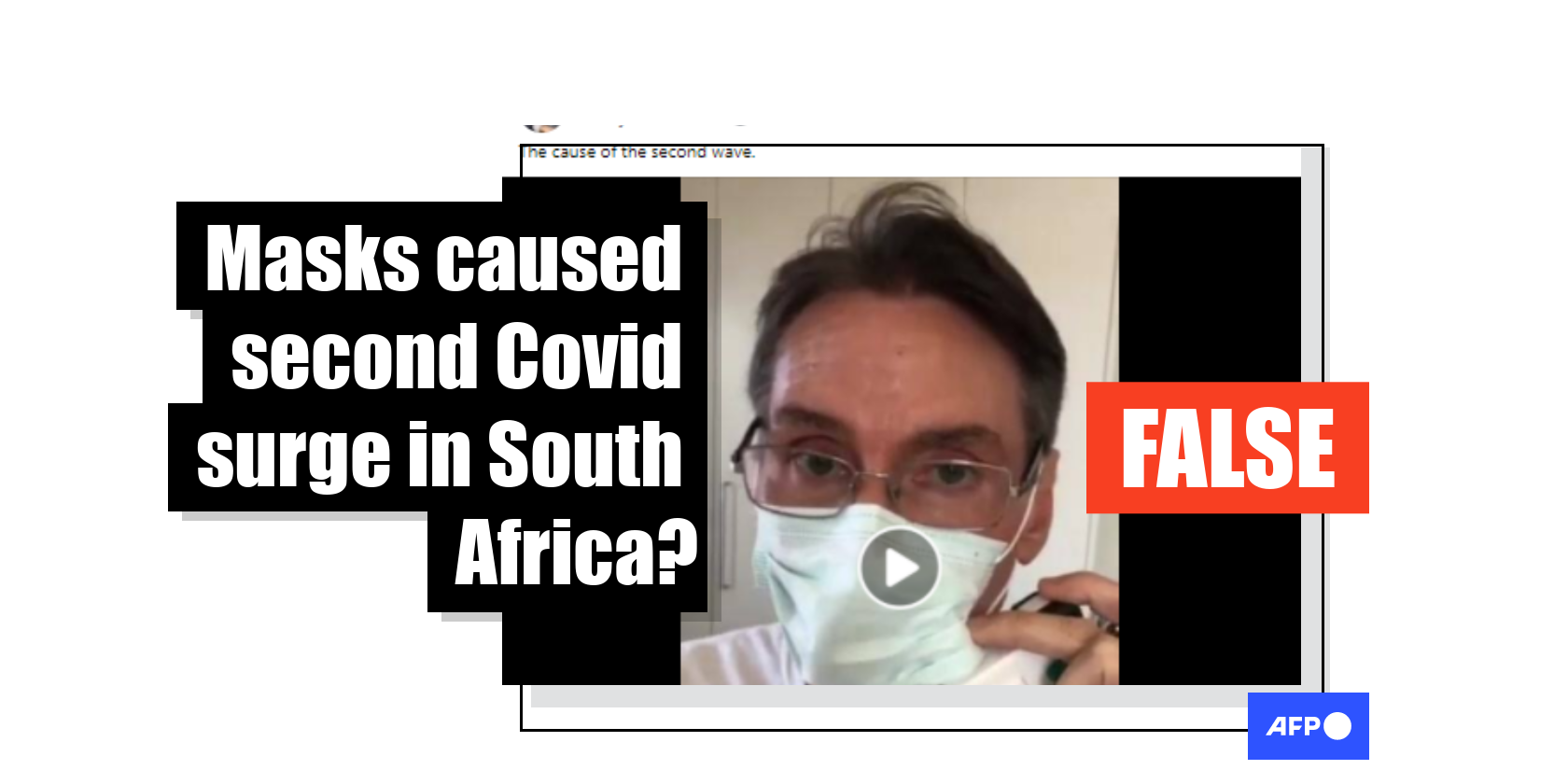 A Facebook post claims that the second wave of Covid-19 in South Africa was caused by people wearing masks rather than the coronavirus pathogen itself. The post relies on a video that purports to simulate a carbon dioxide test, but experts dismissed the demonstration as inaccurate, reaffirming that masks are safe to wear and they remain one of several recommended preventative measures against the disease. The latest Covid-19 surge in the country was caused by a new variant of the coronavirus.

The video, running at just over two minutes, was posted here on Facebook on January 18, 2021.

“The cause of the second wave,” reads the caption on the post, shared hundreds of times since it was published. 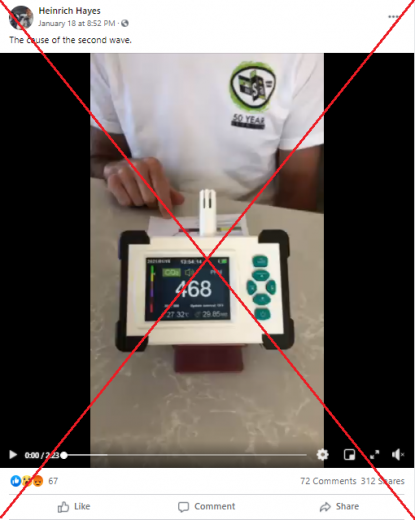 A screenshot of the misleading post taken on January 26, 2021

The man in the video uses a carbon dioxide (CO₂) detection meter to argue that wearing masks is harmful.

He does this by placing the meter behind the mask covering his mouth. On the meter’s display panel, a reading that claims to measure CO₂ levels begins to rise, until it reaches almost 10,000 parts per million (ppm).

Levels of more than 5,000 ppm, according to a chart the man produces, could lead to severe side effects, including death.

But, in July 2020, AFP Fact Check debunked a similar experiment, which experts dismissed as faulty science then, adding there are no serious health effects associated with masks.

Experts explained that 5,000 ppm of CO₂ is the highest recommended exposure for people working eight-hour shifts every day, particularly in closed spaces.

In fact, the Centers for Disease Control and Prevention (CDC) and US-based Food Safety and Inspection Service advise that 40,000 ppm and higher is considered a dangerous level, even for short periods of time.

Benjamin Neuman, an expert in coronaviruses who chairs the biological sciences department at Texas A&M University-Texarkana, said the demonstration in the video makes incorrect assumptions.

In the experiment, a piece of equipment like the CO₂ meter will give a reading but the device cannot tell whether it is being used correctly or “whether there are flawed assumptions behind an experiment, as in this case,” Neuman said in an email to AFP Fact Check.

“Exhaled human breath is around 3.8 percent carbon dioxide, which would be 38,000 parts per million on the meter in the video, and of course comes out the nose and mouth.

“He measures a maximum of around 1 percent carbon dioxide right after exhaling, which tells you right there that the mask is not doing a good job of retaining CO₂ since nearly three quarters escapes before it can be detected,” said Neuman.

Instead, a good control would have been to hold the machine at the same distance from the mouth without a mask and then measure the reading.

“When you are close to the part of a living thing where CO₂ comes out, you should expect to find some CO₂. With this test, he has demonstrated that he is alive, and nothing more.”

Neuman explained further: “An exhale is about half a litre of gas per breath. If masks were not permeable to gases, they would inflate and deflate like half-litre bubblegum balloons with each breath.”

So, the man in the video mistakenly presumes that the air he breathes in mainly comes from exhaled air, which is again not the case because the mask is permeable to gases.

Neuman referred to research on the wearing of N95 masks which concluded that the amounts of oxygen and CO₂ entering the body are no different when wearing a mask.

“The meter is designed to measure air in a closed room. If there is a buildup of carbon dioxide in the air that you inhale, that can certainly be bad over time, but that is not the case here.

“What changes when wearing a mask is not gas concentration but resistance: how hard it feels that your lungs have to work to pull in air,” said Neuman.

Even then, different masks have different resistance levels.

According to Neuman, the body does a “wonderful job” of compensating for this and keeping gas levels in a relatively narrow range, for example when you’re asleep or jogging.

Neuman said if the man in the video was looking to publish his findings as evidence in a reputable scientific journal, it would be rejected with similar comments.

“The person in the video is confusing what he feels with reality and doing a very flawed demonstration to make a point, rather than to understand the situation. It's far less interesting than a good magic trick, and no more real. This video is not what science is, or what it is for.”

Hyo-Jick Choi, a researcher at the University of Alberta, has designed surgical masks and respirator filters that deactivate certain viral strains and he believed the meter used in the demonstration “may provide more reliable values when measuring CO₂ in the atmosphere, as opposed to measuring CO₂ in a dynamic situation like CO₂ levels behind a mask during breathing”.

“If the experiments are correct, the carbon dioxide values should show an up (when exhaling) and down (when inhaling) trend over time, according to the respiration process,” said Choi in an email to AFP Fact Check.

However, in the video, the CO₂ values do not appear to decrease during inhalation, but continue to increase.

“The device does not seem fit to monitor real-time carbon dioxide changes during the respiration process, which is supported by the continuous increase of the carbon dioxide values, as the video shows,” wrote Choi.

The man conducting the flawed experiment discourages people from wearing masks, suggesting they would be better off without them.

“It is important to utilise the right tools, methods, and procedures to reach a solid conclusion,” he added.

False and misleading claims regarding the safety and efficacy of masks during the Covid-19 pandemic have been the subject of numerous debunks by AFP Fact Check (see here, here, and here).

Unlike the caption on the post claims, the second wave of Covid-19 in South Africa was spurred by a new variant of the coronavirus first identified in the country. It was confirmed to be more contagious than earlier variants, and has accounted for higher hospital admissions, but there is no evidence that it is more deadly.

The discovery of the new variant – known as 510Y.V2 – convinced local authorities to introduce new restrictions in December 2020 to slow its spread.

The country has recorded almost 1.5 million detected infections and more than 44,000 fatalities since the pandemic began – the highest number of cases and deaths in Africa.

Use the COVID Alert SA app to protect yourself, your loved ones and your community. Start using this privacy preserving app today. Add your phone to the fight! Download the Covid Alert SA app now! https://t.co/8YKEqaiiRF pic.twitter.com/gyWzbHbmrx

However, on February 1, 2021, South Africa’s President Cyril Ramaphosa said the country had “passed the peak” of its second Covid-19 infection wave, allowing for the easing of restrictions ahead of the first anticipated vaccinations this month.

“The average rate of new infections has been steadily coming down over the last three weeks, indicating that we have now passed the peak of the second wave," Ramaphosa announced.

The South African variant, as well as new variants detected in Britain and Brazil, were found to have mutations to the virus' spike protein, which enables the virus to latch onto human cells, playing a crucial role in driving infections.

A preliminary study reported by AFP on January 20, 2021, also found that the variant in South Africa posed a significant risk of reinfection.

However, in January 2021, vaccine makers Pfizer/BioNTech and Moderna announced that their vaccines would be effective against the new variants. 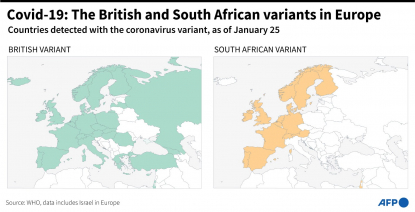 An AFP graphic showing the British and South African variants as of January 25, 2021