Skip to main content
A Singapore Airlines plane is parked beside Scoots passenger planes on the terminal tarmac at Changi International Airport in Singapore on March 15, 2021. (Photo by Roslan RAHMAN / AFP)

A video has been viewed tens of thousands of times in social media posts that claim it shows a large group of South Asian travellers at Singapore’s Changi Airport on May 5, 2021 -- just before the country announced new travel restrictions on visitors from covid-hit India. The claim is misleading: the Civil Aviation Authority of Singapore (CAAS) said the footage was at least a month old. AFP found there were no flights from India arriving at Changi Airport on May 5, 2021 at the time the video was purportedly filmed.

The video shows the arrival hall in the Changi Airport. Two men can be heard throughout the video discussing whether the passengers were in Singapore for work or travel.

At the video’s 41-second mark, a man can be heard saying: “so many going and so many come out.” 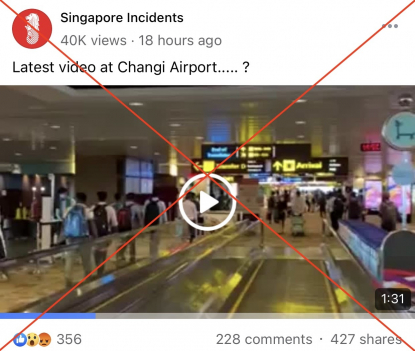 The Singapore health ministry announced on May 6, 2021 that long-term visa holders and short-term visitors with recent travel records to India would be denied entry.

The misleading post was taken down on May 6, 2021, and the user posted an apologetic note here.

Identical footage was shared alongside a similar claim on Facebook here, here and here; and on YouTube here.

On May 6, 2021, the Civil Aviation Authority of Singapore said in a post on its Facebook page that the claim was misleading and the footage had not been filmed on May 5, 2021.

“No flights from South Asia had arrived at Terminal 1 in the early afternoon of 5 May 2021,” CAAS said.

“Based on the video footage, passengers were seen walking past a renovation hoarding at gate hold room D42/43. This hoarding was removed on 5 April 2021.”

According to the passenger arrival status record on Changi Airport's website, AFP confirmed that no flights from India had landed on May 5, 2021 between 2:00pm and 4:00pm.

A screenshot, taken on May 12, 2021, of the passenger arrival status record on Changi Airport website.

The Singapore government said in a statement published on May 7, 2021 that although passenger flights from South Asia continue to arrive in Singapore, these flights mainly transport returning Singapore citizens and Permanent Residents, freight, or fly in empty to pick up passengers in Singapore who are returning to South Asia.

All travelers are subjected to strict health measures and are escorted separately from passengers coming from other countries via Changi Airport, the statement said.

The government also confirmed that on May 5, 2021: “there were 5 passenger flights arriving in Singapore from South Asia, carrying a total of 50 passengers, all of whom were returning Singapore citizens or Permanent Residents”.

A screenshot, taken on May 12, 2021, of the breakdown of the passenger flights arriving from South Asia on May 5, 2021 from the Singapore government statement.

Singapore’s Ministry of Transport also debunked the misleading claim with the same evidence in a statement published on May 7, 2021 here.