Skip to main content
A woman speaks on her mobile phone as she waits in a line to buy face masks at a retail store in the southeastern city of Daegu on February 25, 2020. (AFP / Jung Yeon-je)

Korean-language Facebook posts circulating in May 2021 purport to share a tip about how people can obtain a discount on their mobile phone bills. The claim is false: the South Korean government and domestic telecommunications operators said the purported tip was not genuine. South Korean media outlets previously debunked the claim after it first circulated in 2014. 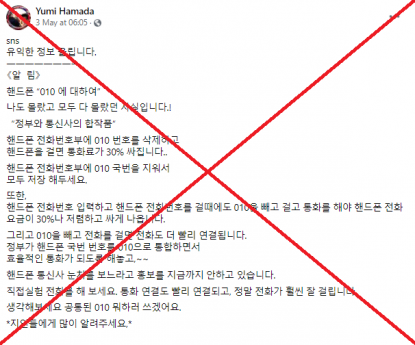 The post’s Korean-language caption translates to English in part: “Regarding the number 010. It's something no one knew.

“It’s a joint work of the government and telecommunications operators. If you call someone’s mobile phone without adding 010, you will get a 30% discount.

“Also if you don’t add 010, the call goes through faster. Try it. Your call gets connected faster... Haven’t you wondered why we have been always needing to use 010?”

All mobile phone numbers in South Korea begin with '010' regardless of the operator.

This rule was introduced by the government in 2004, as mentioned in this statement issued by the South Korean Ministry of Science and ICT.

An identical claim was shared on Facebook here, here and here.

A spokesperson for the government's Ministry of Science and ICT said the claim was “utterly false.”

“The ministry has never discussed or attempted to implement such a discount scheme with operators,” the spokesperson told AFP on May 10, 2021.

“Since October, a claim has been circulating online that people get discounts on their phone bills when they make a call without dialing 010… We would like to let you know that this is completely groundless,” said the ministry in the 2014 post.

A spokeswoman at SK Telecom, the largest telecommunications operator in South Korea by market share, told AFP the claim was "baseless".

"It’s an old hoax that has been circulating for many years,” the spokeswoman told AFP.

The claim has been debunked by several South Korean media outlets, including Yonhap News Agency and Edaily.