Skip to main content
Head of Dictionaries at the English Language Teaching Division of Oxford University, Patrick White, poses for a photograph with the copy of the ninth edition of Oxford Advanced Learner's Dictionary during its launch at the British Library in the Indian city of Ahmedabad on January 24, 2015. A number of Indian words including keema, papad and curry leaf have been included in the latest addition. (AFP / Sam Panthaky)

Korean posts mislead on origin of the English word ‘family’

Social media posts circulating in South Korea claim that the origin of the English word “family” is a combination of the words “father,” “mother” and “I love you.” The claim is false: the Oxford English Dictionary traces the origin of the word “family” to the Latin for “household” or “servant”, while a professor of classical studies pointed out that the definition of “ily” as “I love you” appears to be modern Internet slang.

The claim was shared here on  South Korean blogging platform Tistory on May 4, 2021. 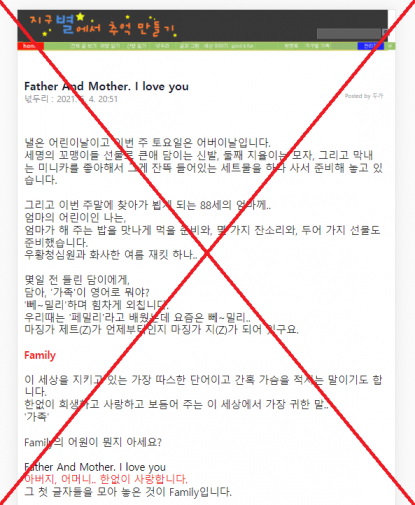 “Do you know what the origin of the word ‘Family’ is?” the Korean-language post reads in part. “Father And Mother. I love you. Family is the arrangement of the first letters from this.”

The Oxford English Dictionary traces the etymology of the English word “family” to the Middle French word “famile,” which in the 14th century meant a “group of people living under the same roof” or “household.”

The Middle French word in turn derives from the Latin word “familia,” meaning a household, including its servants, the OED notes. The Latin word is a combination of the word “famulus” meaning “servant” and the suffix “-ia,” it explains.

The Oxford Learner’s Dictionary, which is aimed at non-native English speakers, also explains that the word “family” is derived from the Latin word “famulus”, meaning “servant”.

Professor Joseph Howley, an expert in classical studies at Columbia University, agreed with the Oxford Dictionary’s explanation. He added that the Latin word “famulus” may have been related to similar words in other ancient Italian languages like Oscan.

Contacted by AFP, Professor Howley noted the Middle French definition for “familie” in the 14th century evolved in the 15th century to mean a “group of people related by blood,” before taking on “various generalized and transferred forms, as well as being adopted into English,” he wrote.

Professor Howley said the false claim circulating on social media resembled what academics call “folk etymology,” which is “when people make up their own explanation of how a word's origin relates to its meaning, independent of what we would think of as linguistic or scientific method.

He also pointed out that equating “ily” to “I love you” appears to be contemporary Internet slang.