Skip to main content
Packages of Sinovac vacinnes against COVID-19 are pictured in Fredonia, Colombia, on March 10, 2021. (Photo by JOAQUIN SARMIENTO / AFP)

The claim was published on Facebook here on March 4, 2021. 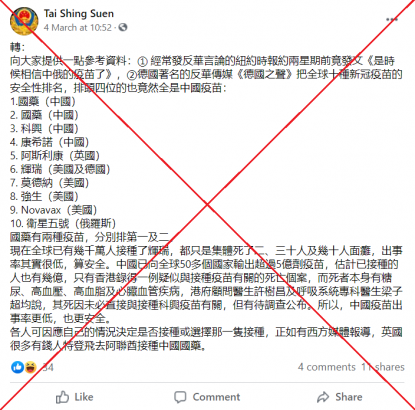 The lengthy traditional Chinese post translated to English as:

“For everyone's information: 1) The New York Times, which often makes anti-China remarks, published an article about two weeks ago headlined: 'It’s Time to Trust China’s and Russia’s Vaccines', 2) The famous German anti-China media 'Deutsche Welle' ranked the safety of ten new coronavirus vaccines in the world, and the top four are all Chinese vaccines:

“So far, tens of millions of people around the world have been inoculated with Pfizer, and only around 20 to 30 died of it with dozens suffering from facial paralysis. In fact, the accident rate is very low, which is considered safe. China has exported more than 500 million doses of vaccine to more than 50 countries around the world, and it is estimated that hundreds of millions of people have been vaccinated. Only Hong Kong has recorded a death case suspectedly related to vaccination, but the deceased had diabetes, hypertension, hyperlipidemia and cardiovascular diseases. Both David Hui, consultant doctor for the Hong Kong government, and respiratory specialist Leung Chi-chiu said that the cause of death may not be directly related to the Sinovac Biotech vaccination, but to be investigated and announced. Therefore, China's vaccine accident rate is lower and safer.

“Everyone can decide whether to vaccinate or which vaccine to choose according to his/her own situation, just as what western media reported, many rich people from the UK flew to the UAE to receive Chinese Sinopharm vaccines.”

The same message was also published on Facebook here, here, here and here.

Another similar message has circulated on Facebook and Whatsapp, which can be seen such as here, here and here, claiming that the safety ranking list was reported by The New York Times.

However, the piece was published as an opinion essay here on February 5, 2021 by Achal Prabhala and Chee Yoke Ling. The paper identified Prabhala as an Indian public health activist and Chee as a Malaysian public interest lawyer.

The article was not an NYT editorial endorsement nor a piece of reporting by the paper's staff correspondents.

The New York Times published this statement on Twitter on March 10, 2021 saying they were aware of misleading messages circulating online.

We are aware of misinformation circulating on WhatsApp, which falsely ranks the safety of worldwide coronavirus vaccines and attributes this list to a report published by The New York Times. (1/3) pic.twitter.com/uW3PSJbX86

“The New York Times did not publish this list, our reporting has not suggested that Chinese vaccines are superior to vaccines produced elsewhere, nor have we published claims that China has exported more than 500 million doses,” reads the statement.

The misleading post cites a Deutsche Welle news article that was published on the outlet’s Chinese language page here on October 7, 2020.

The report is headlined “The 10 most advanced Covid-19 vaccine projects in the world”.

However, the report does not rank the safety of Covid-19 vaccines, as the misleading posts claim.

The report’s first paragraph translates as: “At present, there are 10 coronavirus vaccine projects in the world that have entered into the final stage, namely Phase III trials. Four of them are from China, three from the US, one from Germany, one from the UK and one from Russia.”

The list in the Chinese-language article is a list of vaccines that were in Phase III trials at the time of publication in October 2020.

The post makes multiple misleading claims about vaccine safety, many of which AFP has previously debunked.

The misleading post claims that after receiving the Covid-19 vaccine produced by Pfizer "around 20 to 30 died of it with dozens suffering from facial paralysis."

AFP Fact Check has debunked misleading claims about deaths linked to the Pfizer vaccine in Japan, Germany, Norway, and the US. In all of the cases, local medical authorities said there was no direct link established between the deaths and the vaccine.

The Pfizer-BioNTech Covid-19 vaccine has been approved for use by countries around the world, including Britain and the United States, as reported by AFP.

America's Centers for Disease Control provides information on the safety and efficiency of the Pfizer-BioNTech vaccine here.

Unlike rival vaccines such as those from Pfizer/BioNTech, Moderna and AstraZeneca, Sinovac has yet to submit its third-phase clinical trial data to medical journals for peer review, AFP has reported here.

The misleading post claims that "China has exported more than 500 million doses of vaccine" and that "hundreds of millions of people have been vaccinated" with only one recorded death in Hong Kong.

A country-by-country tally by The Associated Press shows China has orders for roughly half a billion doses of its vaccines over 45 countries.

Hong Kong does offer the Sinovac vaccines to citizens, although demand has reportedly been falling, local media has reported.

A man died on February 28, 2021, days after receiving Sinovac vaccination in Hong Kong.

David Hui, government adviser on Hong Kong vaccination programme, and Leung Chi-chiu, Hong Kong specialist in respiratory medicine, said it was unlikely the death was linked to the vaccine, as reported by Hong Kong media here and here.

In total, three people have died in Hong Kong after receiving the Sinovac vaccine, according to government data published here, although the government has only released the preliminary investigation for the February 28 case.

The posts’ claim that UK residents can receive China’s Sinopharm vaccine in the UAE appears to be partly true, as noted in media reports about an exclusive vaccine tourism business here and here.

The same misleading claim about the NYT/DW endorsement of China's vaccines was also debunked by Hong Kong fact-checking organization Kauyim here. Kauyim mentions that the misleading claims have also circulated on WhatsApp.