A photo has been shared on multiple posts on Facebook, Twitter and Naver blog alongside a claim that Kim Kyoung-soo, the governor of South Korea’s South Gyeongsang province, received a Covid-19 vaccine shot through his jacket. The claim is misleading: the photo was taken during a mock vaccination exercise on March 2, 2021; no actual Covid-19 vaccine shots were given that day, a government official says.

The photo and claim were shared here on a Naver blog post on March 8, 2021. 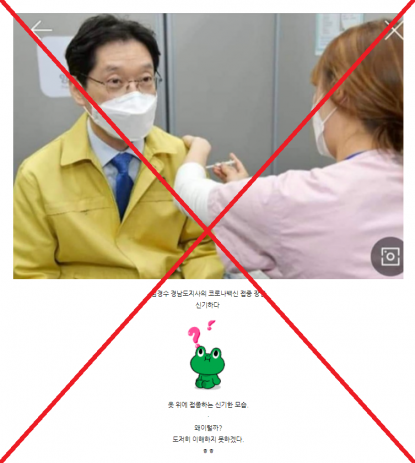 Screenshot of the misleading Naver blog post, captured on March 10, 2021

Part of the Korean-language text in the post translates to English as: “A scene of South Gyeongsang Governor Kim Kyoung-soo receiving his Covid-19 vaccine shot. How odd.

“A peculiar scene where inoculation is done over one’s clothes.”

Kim Kyoung-soo is the governor of South Gyeongsang province.

The post was shared days after South Korea launched its national vaccination drive on February 26, 2021.

The photo has also been shared alongside a similar claim on Facebook here and here, and on Twitter here.

The exercise involved inspections on the vaccination process, including vaccine’s availability and storage conditions, according to a statement published by the provincial government on March 2, 2021.

Shim Eun-jeong, an official from the South Gyeongsang government’s infectious disease control department, told AFP via telephone on March 9, 2021, that participants were given mock injections meant to simulate how actual vaccinations would take place at the hospital.

“No actual vaccination shots were administered during the exercise,” Shim added.

Yonhap News Agency published this photo of Kim on March 2, 2021, which was taken from a different angle on the same day.

The Korean-language caption of the photo reads: “South Gyeongsang Governor Kim Kyoung-soo participates in a vaccination drill during a ‘Covid-19 Yeongnam region mock exercise’ held at Pusan National University Yangsan Hospital in the afternoon of March 2, 2021.”

As of March 12, 2021, South Gyeongsang province has vaccinated 45,355 people according to the Korea Disease Control Agency (KDCA).