Soon after Oprah Winfrey's interview with Prince Harry and Meghan Markle was aired on CBS on March 7, 2021, an image circulated online purportedly showing a screenshot of a tweet by former US President Donald Trump commenting about the show. The claim is false: Trump’s Twitter account remains suspended as of March 2021; the purported tweet uses an out-of-date format that Twitter stopped using in 2017.

The purported tweet says: “Watching train wreck Harry and Megan interview on Oprah. Very sad to watch. Met the Prince when he was a boy - thought he was from Harry Potter. Crazy Markle has changed him, total embarrassment. Told him he’d need luck with this one. She needs to shave moustache - or divorce?” 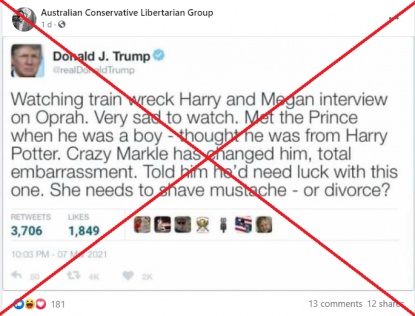 The posts were shared following Oprah Winfrey’s interview with Prince Harry and Meghan Markle, the Duchess of Sussex, which aired on US television network CBS on March 7, 2021.

The account was suspended “due to the risk of further incitement of violence,” Twitter’s post read, following the U.S. Capitol riots on January 6, 2021, as reported here by AFP.

In June 2017, Twitter introduced circular profile pictures and switched to a “speech bubble” for its reply icon -- as opposed to a left-pointing arrow which appears in the misleading post.