Skip to main content
Juventus' Portuguese forward Cristiano Ronaldo looks on during the Italian Serie A football match Parma vs Juventus on December 19, 2020 at the Ennio-Tardini stadium in Parma. (AFP / Alberto Pizzoli)

Two photos of Portuguese footballer Cristiano Ronaldo have been shared repeatedly on Facebook, Twitter, YouTube and in blog posts alongside a claim he converted to Islam. The claim is misleading; the photos have circulated online since 2014 in reports about Ronaldo visiting Dubai. There are no credible media reports or public statements indicating that Ronaldo, who is reportedly Catholic, has converted to Islam.

The misleading claim and the photos were published on an Indonesian-language blog here on December 19, 2020. 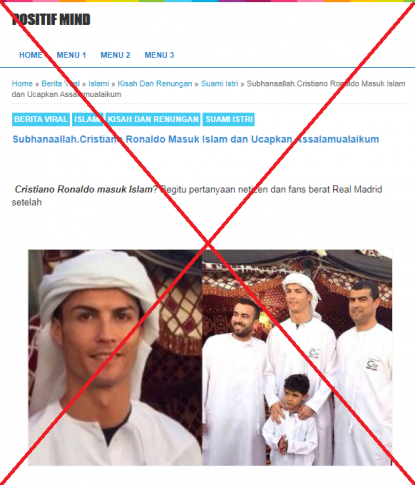 Screenshot captured on December 29, 2020, of the misleading blog post.

The post’s headline translates into English as “Subhanallah. Cristiano Ronaldo Converted to Islam and Said Assalamualaikum”.

"Subhanallah" and "Assalamualaikum" are Arabic terms which denote "Glory to God" and "Peace be with you" respectively.

A similar claim has circulated online since at least 2014. The same photo of Ronaldo was published alongside the same claim in French on an online forum here and on Twitter here; in an English blog post here and in a Croatian video on YouTube here.

A reverse image search on Google found that the photo of Ronaldo was published by Arabian Business, an online magazine in Dubai, here on December 28, 2014.

The article's headline reads “In Pics: Cristiano Ronaldo spends Christmas in Dubai”. It reports that the footballer posted a series of photos on his social media accounts during the trip.

The article does not state that he converted to Islam. 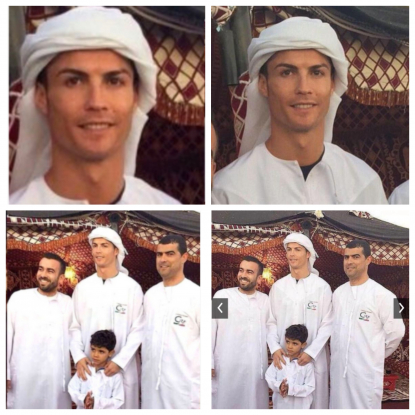 One of the photos was also published here by Dubai-based media channel Emirates 24/7 in a 2014 report about Ronaldo's Dubai trip.

There are also no public statements or credible reports indicating that he has ever converted to Islam.

Ronaldo is in fact a practicing Catholic, according to media reports. UK tabloid The Daily Mirror reported here in 2012 that the Juventus player is “staunchly Catholic” and El Comercio, a Spanish-langue Peruvian news site, reported here in 2016 that he is “the most religious of footballers”.