These photos show sculptures made by a French artist in 2016

Five photos have been shared multiple times on Facebook, YouTube and in blog posts alongside a claim they show mythical creatures in Myanmar. The claim is false; the photos actually show sculptures made by a French artist in 2016.

The photos were published in a blog that was shared on Facebook here on December 19, 2020. The post has been shared 208 times. 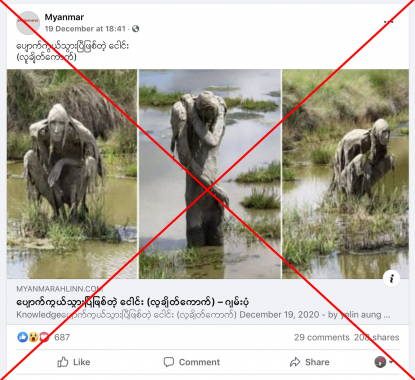 A screenshot of the misleading post taken on December 28, 2020

The blog's Burmese-language title translates to English as: "Ngao (aka Human Hook) is now extinct in Myanmar".

Part of the article translates as: "The shape of Ngao is very strange. It looks like a human. It has only one leg and usually hops using one leg. It also has a sharp comb at the back of its head that looks like an ice-pick. They use it to climb and cling to big trees.

"As it has only two joints; waist and ankle, it cannot bend its knee like a human. But it's said that it is the world's fastest creature when it comes to running.

"As the creature in the photo has two legs and can bend its knees, it might be one of the Ngao species."

Reverse image and keyword searches on Google found the photos in fact show sculptures made in 2016 by French sculptor Sophie Prestigiacomo. The photos can be seen on Prestigiacomo’s website here and on Facebook pages related to the collection here and here.

According to the posts, the sculptures were created with algae, mud and seaweed and were displayed at the Marshes Nature Reserve of Séné on the coast of Morbihan, France.

Below is a screenshot comparison of the photos shared in the misleading Facebook posts (L) and the photos from Prestigiacomo’s website (R): 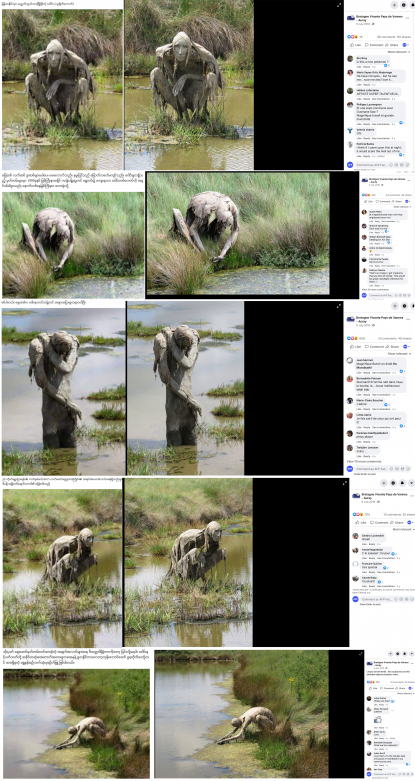 “Thanks to crowdfunding, she was able to bring her new works to life with the help of Régis, her husband, also a visual artist,” part of the report reads. “Created on site, these beings were born from the mud and algae.” 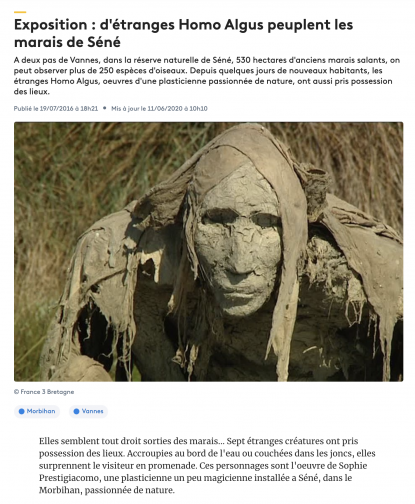 On August 1, 2016, France Info published a video report on the collection on YouTube here that shows Prestigiacomo and her sculptures.