Skip to main content
A man (R) received a nucleic acid test for the Covid-19 coronavirus in Guangzhou in China's southern Guangdong province, on May 30, 2021. (Photo by STR / AFP)

A video of an overcrowded street has been viewed thousands of times in Twitter posts that claim it shows disorderly Covid-19 vaccination queues in the southern Chinese city of Nanning. The claim is false: the video was filmed in the Chinese city of Guangzhou where local authorities rushed to conduct mass testing to curb an uptick in Covid-19 infections in May 2021.

“People coming for vaccination in Nanning, Guangxi. If there is one tested positive among them, they all will be quarantined,” reads the Chinese-language caption to this video posted on Twitter on May 31, 2021.

The video has been viewed more than 5,000 times. 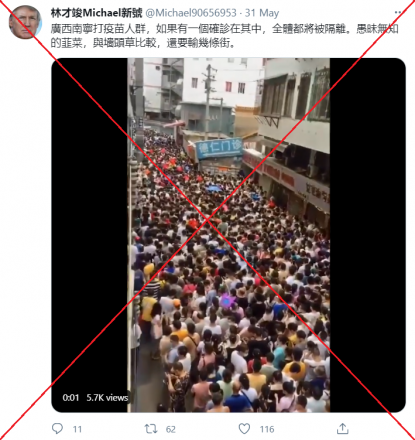 The video circulated online days after an imported case of Covid-19 was reported in Nanning, the capital of the autonomous Guangxi region in southern China.

An identical video was also shared alongside a similar claim on Twitter here and here.

The claim is false: the video was not filmed in Nanning.

Keyword searches of Chinese characters shown in street signs in the video found its location corresponds to this street view on Baidu Maps.

The street is located in Guangzhou, a city more than 500 kilometres east of Nanning.

Below are screenshot comparisons between the video in the misleading Twitter posts (L) and the Baidu Maps street imagery (R): 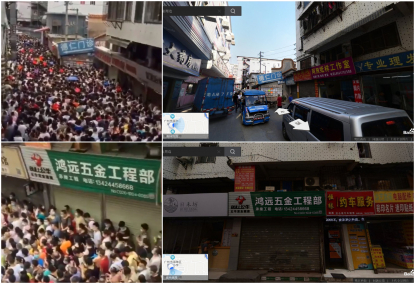 The video corresponds to multiple posts on Douyin which show people lining up for Covid-19 tests--not vaccination--in Guangzhou.

“On such a hot day, the streets are full of people queuing up for Covid-19 tests. Someone is suffering from heatstroke! Can each community take turns to test?” reads the caption to this Douyin post on May 31, 2021.

Authorities ordered residents of entire districts in Guangzhou to test for Covid-19 after more than a dozen local infections were reported in late May 2021, AFP reported.

Below is a screenshot comparison of the video in the misleading Twitter posts (L) and the first Douyin video (R): 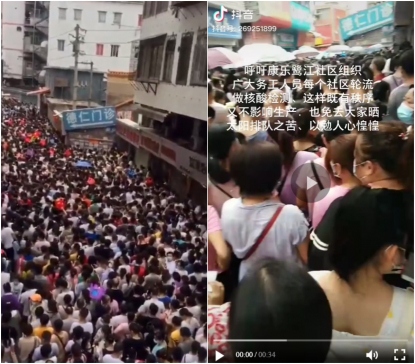