Multiple Facebook and Twitter posts have shared an image that they claim shows an actual photograph of the Himalayas shot from the International Space Station. But the claim is false: the image is not an actual photograph and was in fact created using digital effects software.

The image was posted June 3, 2021 by an India-based user here in a public Facebook group called ‘Mysterious Facts’.

The misleading post’s caption says: “The Himalayas from the International Space Station”. A Google reverse image search found the same image on Hormann’s website where prints of his work are available for purchase.

The misleading posts have rotated the original image created by Hormann 90 degrees clockwise and cropped out the credits. 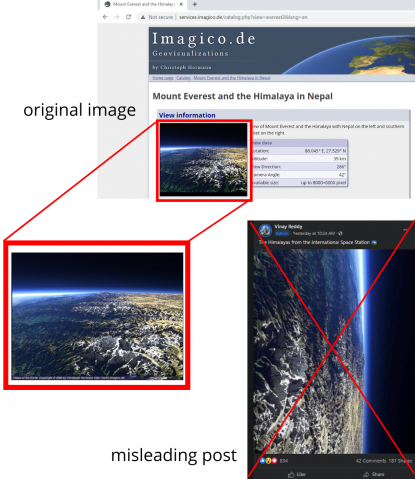 Screenshots comparing the original image and the image in the misleading post. Taken June 4, 2021.

Its caption reads in part: “This image was created by Christoph Hormann using data obtained from satellites such as Landsat and SRTM (Shuttle Radar Topography Mission).

“The data was processed into computer models using three-dimensional rendering software and then coloured and distorted to mimic the natural curvature of the Earth.”

Actual photographs taken from the ISS of the Himalayas and other places on Earth, can be found on NASA’s official website.