A Facebook post shared more than 4,000 times purports to show that Academy Award-winning South African actress Charlize Theron has been funding the ruling African National Congress party and opposition Economic Freedom Fighters. However, it uses doctored photos to support its claim. The ANC told us it had no record of the donations mentioned in the meme.

The post, which we’ve archived here, shows two images of Theron, one behind a podium that reads “Black Rights Campaign” and another in which she’s seen wearing what looks like a supporter’s t-shirt depicting the face of Julius Malema, leader of the Economic Freedom Fighters (EFF) party. 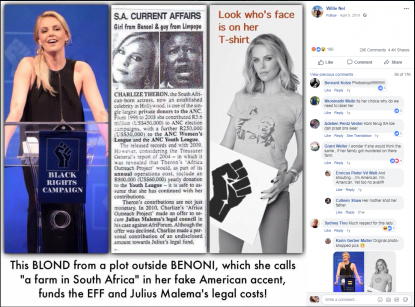 The same meme can also be found in a vulgar tweet posted on March 12, 2018. The account has since been suspended. 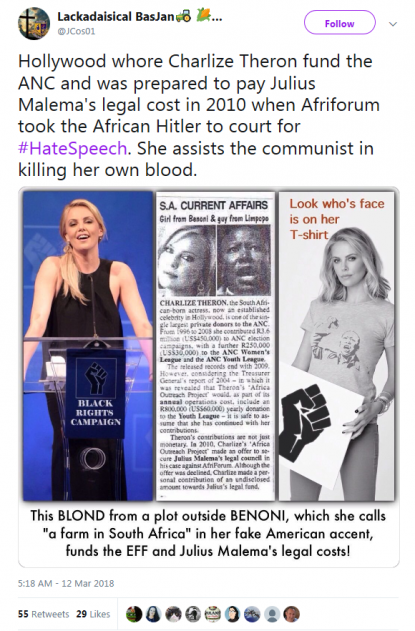 A screenshot taken on May 22, 2019 of an archived tweet that used the meme

A reverse image search of the meme returned very few results. However, cropping each image out of the collage and running a fresh reverse search revealed that both pictures of Theron are doctored versions of photos taken in 2012. 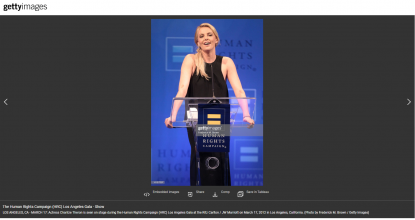 A screenshot taken on April 23, 2019 of the image on Getty. Photo by Frederick M. Brown

The second photo was taken as part of Theron’s campaigning work against HIV. In the meme, her t-shirt was digitally altered to replace the logo of her Africa Outreach Project with a picture of Malema, and the sign to replace the HIV message with a “black power” clenched fist. 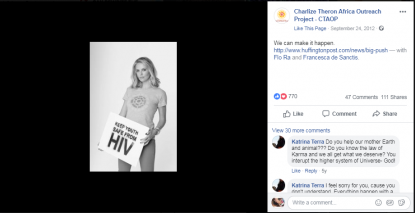 A screenshot taken on 23 April, 2019 of a post on the Charlize Theron Africa Outreach Project Facebook page

Our next step was to try to figure out if the newspaper article that appears between the two images was genuine. A reverse image search linked it to a 2014 tweet by a former South African actress, but few other leads.

The only similar news article was this short post in Afrikaans, published on March 28, 2013, which cited the same alleged donation figures as the article used in the meme. It gave no source for this information. 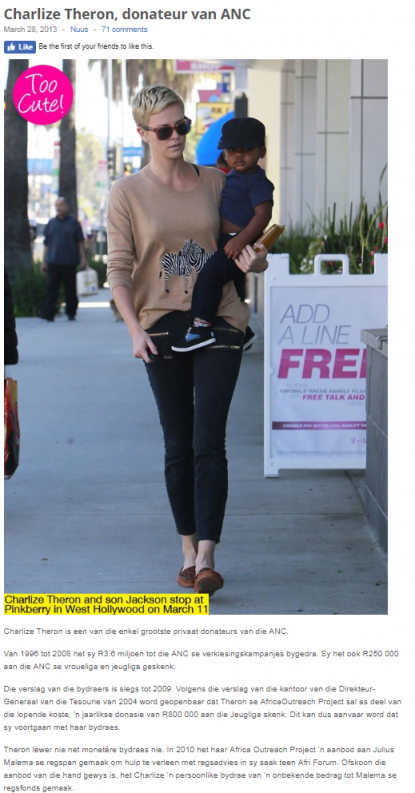 An article in Afrikaans made the same unverified claims about political donations by Theron, in 2013

However, ANC spokesman Dakota Legeota told AFP that he had inquired with the party’s treasurer-general Paul Mashatile and the ANC Women’s League and they were unaware of the donations mentioned in the meme.

“They don’t have knowledge of that money, I’ve even checked with the women’s league,” said Legoete.

Theron is discreet about her political views and we were unable to find any public declaration of support for any South African political party including the ANC, which has governed since the end of apartheid.

She met Nelson Mandela in 2004 and has spoken of how how he influenced her campaigning work combating HIV. She also met then-president Jacob Zuma in 2013 to discuss the fight against the disease.

She has expressed concern over racism in the United States where she is raising two black children, both of them adopted.