Skip to main content
The sturgeon caught by fishing guide Steve Kaye on August 9, 2016, on the Fraser River, in the western Canadian province of British Columbia (Courtesy of Steve Kaye)

A photo of a seven-foot long sturgeon caught in British Columbia in August 2016 has travelled the world online, mostly without mention of its original context. People posted the photo on social media, reporting sightings of the large fish all over North America, in Central America, Europe and Asia. More recently it has returned to Canada with claims that the beast was spotted in the streets of Gatineau, Quebec following a flood.

“It wasn’t the biggest fish I ever caught, not even by a long shot,” Steve Kaye, a fishing guide in the western Canadian province of British Columbia, told AFP. On August 9, 2016, while out fishing with clients, his line caught a large sturgeon which he estimated weighed between 185-200 pounds.

Kaye sent AFP the original photo of the sturgeon by email, along with two other images showing the fish from August 9, 2016.

For Kata Kaye, the administrator of Sturgeon Hunter, Steve’s fishing tour company, the photo of the fish caught in the waters of the Fraser River was something to be shared on social media. Kaye was right beyond what she could foresee. Within a week, people reported the sturgeon was in Maine or Idaho, sometimes claiming to have caught it themselves, or as a joke.

“It’s just ridiculous, the places we’ve seen it pop up. Russia, overseas, pretty much any river that remotely has sturgeon in the US it’s been reported in, all over Canada, you name it,” Steve Kaye recounted to AFP.

The photo was also shared in other languages, with reports of a large unknown fish in Indonesia, a six-meter long sturgeon in Italy’s Lago di Posta Fibreno or simply a “strange fish” in El Salvador’s Rio Lampa. 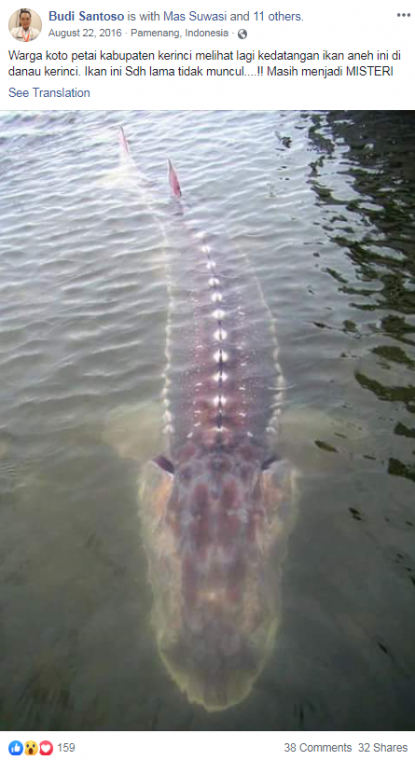 Kaye, who spends nearly every day of fishing season on the Fraser River, downstream from Chilliwack, doesn’t really understand the virality of the photo: “There’s something about that picture that, for some reason, people really like.”

“With a bigger fish like that, once the fish starts to tire, we just lead them to shore, then they can be photographed and released. A lot of times once they do get to shore, they get quite docile,” Kaye said. “It was just sitting there, it was slow and not really moving, recuperating,” when he took the photo.

Kaye said he has reported some of the online publications for poaching his photo and sharing it out of context, but new posts keep appearing. Recently, a 2017 Facebook publication claiming that a two-meter-long sturgeon was found in the streets of Gatineau, Quebec, following a flood, has resurfaced in Canada’s French-speaking province, possibly as a result of the Spring 2019 floods in the same area. 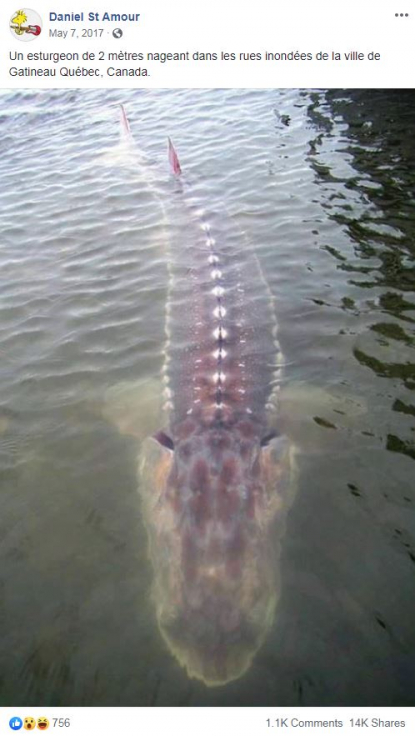 At least some people know that the fish came from the Fraser River.

Kaye joked, “I’ve had multiple clients come back into my boat, show me this picture and say, ‘Can we catch a fish like that?’”