Map tracked the movement of 20 eagles over one year, not just of a single bird

A set of photos and a map are being shared on Facebook purporting to show the 20-year journey from Russia to Saudi Arabia of an eagle with a GPS tracker. This is misleading; the map shows the migration route of 20 juvenile Steppe Eagles over a year.

A Facebook post shared more than 270 times since it was published on May 13, 2021, shows pictures of a dead bird fitted with what appears to be a GPS tracker, as well as a map with routes highlighted in purple.

“This map shows the movement of an Eagle over a twenty years period... It had the tracker fitted in Russia and it finally died twenty years later in the Valley of the Child in Saudi Arabia (sic),” the post’s caption reads. 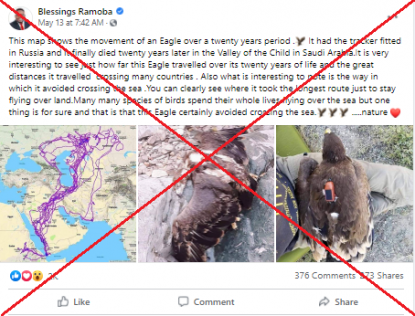 This misleading claim has been circulating online for several years (including here and here), attracting thousands of shares.

A reverse image search of the map yields a mix of results, including similar misleading posts about “the tracking of an eagle over a 20-year period”.

AFP Fact Check found an earlier debunk in Persian from March 4, 2019, which led to a Facebook post by Russian field ornithologist Elena Schneider who explains the true story behind the misleading claim.

“The map, in fact, depicts tracks of 20 juvenile Steppe Eagles (Aquila nipalensis) that were tagged in 2018 in Western Kazakhstan by the team of Dr. Katzner and Dr. Bragin (sic),” Schneider’s post reads.

AFP Fact Check contacted Todd Katzner, who Schneider credited with co-leading the study. Katzner is a research wildlife biologist at the Forest and Rangeland Ecosystem Science Center for the US Geological Survey.

He explained that his team had been studying the migration routes and behaviour of steppe eagles from Central Asia by attaching GPS trackers to birds the scientists captured as nestlings and then released. The map shows about 10 months of movement data from 20 steppe eagles from Kazakhstan.

Each purple line shows the movements of an individual eagle over eight to 10 months. 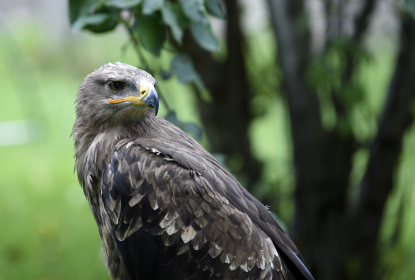 This photo taken on August 17, 2017 shows a steppe eagle at the zoological park in Amneville, eastern France (AFP / Jean-Christophe Verhaegen)

“Some died in Arabia or Africa, others returned to Asia,” Katzner said.

“One of those eagles died in Saudi Arabia and was found by a guy.”

Katzner was told by a friend that the man who found the bird posted about it on Facebook in Arabic.

“I sent the friend the picture of the eagle migration routes and explained that it was a map of 20 steppe eagles migrating. Somehow that got mis-translated and it became ‘20 years of data from a single steppe eagle’,” Katzner said.

“Any qualified birder or eagle biologist can look at the picture of the dead bird and know it is in the first year of its life,” he added. This is because the feathers are distinctive on steppe eagles.