Skip to main content
A young Palestinian searches for items amid the rubble of the Kuhail building which was destroyed in an Israeli airstrike on Gaza City on May 18, 2021 (MAHMUD HAMS / AFP)

As deadly clashes escalated between Israel and Hamas, a video surfaced online accusing Palestinians of applying fake blood to “make the world feel sorry for them”. The video is a hoax: the footage in fact shows a training exercise from 2017, in which make-up artists painted wounds on Gaza residents to train medics.

“The new forgery of Gaza residents,” text superimposed on the footage reads.

The video shows various shots of people with what appear to be fake injuries.

In another shot, make-up artists pour fake blood into containers on what appears to be a film set.

“They make fake blood, and paint wounds that are of course not real,” text on the video reads. “All this in order to make the world feel sorry for them, to make Israel look bad”.

A flurry of misinformation has surfaced on social media as the conflict in the Gaza Strip escalated.

The video has been shared by Facebook users around the world, including in Spain, Brazil and India as well as Twitter users, here and here.

Some Facebook posts shared the video alongside claims about “Pallywood”, a portmanteau of Palestinian and Hollywood. They accused Palestinians of staging dramatic scenes to serve as anti-Israel propaganda.

However, the video is a hoax.

The footage has been taken from a 2017 news report by The Gaza Post. The news site's logo is visible in the video's top left-hand corner.

The first 14 seconds of The Gaza Post’s video is an exact match with the video circulating on social media.

It includes identical shots in the same sequence, as shown in the screenshots from the misleading Facebook video (L) and The Gaza Post’s original video (R) below: 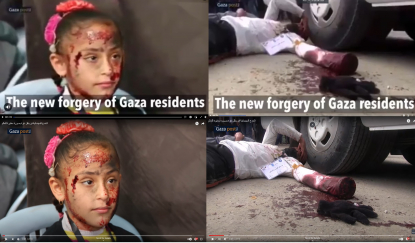 The rest of the shots included in the video circulating on social media are included in The Gaza Post’s news report.

The Gaza Post’s video is titled: “Cinematic tricks: an art that makes the world look differently at Gaza”.

The make-up artist said the shoot featured in The Gaza Post report was for the French charity Doctors of the World in 2017.

“The content of the video was creating almost real injuries for a group of doctors from the French Doctors of the World to train on, and it is a manoeuver coordinated by them,” she told AFP.

Heba Hamarnah, field coordinator for Doctors of the World told AFP the simulation aimed to recreate a road accident in Gaza “with more than 100 injuries''.

“Since 2016, we contracted the same person to do the make-up for injuries to make the simulation more realistic,” Hamarnah said.

The logo for Doctors of the World (Médecins Du Monde) can also be seen on one of the participants of the exercise at around the 17-second mark in the TRT World news report. 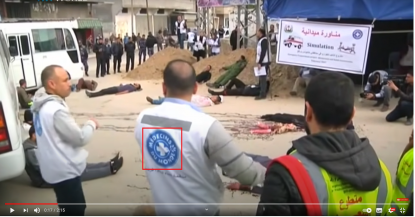 A screenshot of the TRT report showing representatives from Medecins Du Monde, taken May 21, 2021.

Salah told AFP she is still working as a special effects make-up artist in Gaza, adding this is not the first time The Gaza Post news report had been misrepresented.

In 2018, fact checkers at Snopes and France 24 debunked posts falsely using the video to claim about civilians pretending to be wounded in Syria's bloody civil war.