A map has been shared tens of thousands of times in multiple posts on Facebook, Twitter and YouTube which claim it shows elevated sulphur dioxide levels in Wuhan, the Chinese city at the epicentre of the novel coronavirus epidemic. The posts, published in multiple languages, claim the high levels of the gas could be evidence of mass cremation in and around the city. The claim is false; NASA, whose data was used to create the map, told AFP the imagery was created based on forecast figures of man-made sulphur dioxide emissions and volcano gas, not real-time satellite recordings.

The map has been retweeted more than 12,000 times from this Twitter post after it was published on February 9, 2020. 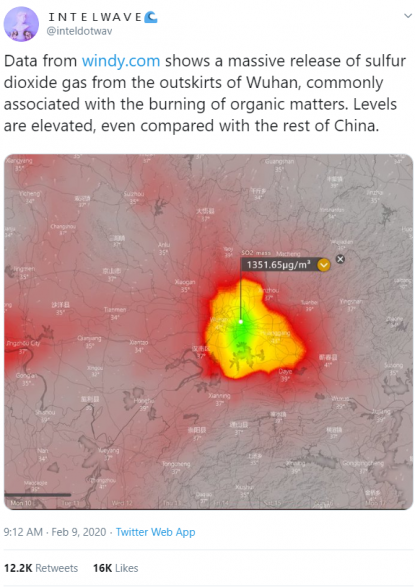 The post’s caption states: “Data from http://windy.com shows a massive release of sulfur dioxide gas from the outskirts of Wuhan, commonly associated with the burning of organic matters. Levels are elevated, even compared with the rest of China.”

The map indicates that 1351.65 µg/m3 of sulphur dioxide (SO2), a harmful gas most often emitted during fossil fuel combustion, was detected between February 10 and 17, 2020, in areas around Wuhan.

It was shared alongside a similar claim in other languages, such as here and here in Chinese, and here in Korean.

The novel coronavirus epidemic has since killed at least 2,118 people and infected more than 74,000 others in China, AFP reported here on February 20.

While the vast majority of deaths have been in Wuhan, claims that the map in the misleading posts shows elevated sulphur dioxide levels in the city is false.

Windy.com, the animated weather forecast website where the map was created, said the map represents a forecast based on NASA data.

In an email to AFP on February 20, the website said: “Please note that Windy.com only visualizes a forecast of SO2, data for this prediction are obtained from NASA and their model NASA GEOS-5, that means Windy.com does not calculate any data on its own and further questions regarding model details about measurements should be directed to NASA only. We also do not store archive weather data.”

Windy.com also provided similar answers on February 9 and 10 in response to a query titled “Wuhan Sulfur Dioxide Levels Abnormally High or Just Industry?” that refers to the misleading posts on social media.

“Our forecasts are based on fixed emission inventories and once SO2 is emitted it is transported by forecast winds,” da Silva told AFP by email on February 20. “Although satellite data has been used in the construction of the emission inventories, these emissions do not account for the day-to-day variations in SO2 emissions and as such cannot account for sudden changes in human activity.”

It states, in part: “The China National Environmental Monitoring Center refuted a report posted on foreign websites that Hubei provincial capital Wuhan, the epicenter of the novel coronavirus outbreak, has experienced a marked increase in its sulphur dioxide density, saying ‘it's a severe distortion of reality’.

“An analysis conducted by satellite experts also showed that the sulphur dioxide density had been kept at a low level in Wuhan and its surrounding areas from Feb 3 to Sunday… The highest density the analysis found during that period was 11.5 mcg/cubic m on Feb 4－far below the concentration of 1,300 mcg/cubic m reported by the website for that time”.