Presidential hopeful Mike Bloomberg posted a video online that shows other candidates at a loss for words following a remark he made during the Democratic debate in Nevada. The clip is misleading; it has been edited to cast his rivals as dumbfounded during a lengthy silence after Bloomberg's comment, but he actually quickly resumed speaking.

“I’m the only one here I think that’s ever started a business, is that fair?” Bloomberg says in the video posted on his Twitter and Instagram accounts, which has also been shared on Facebook here and here.

It then shows about 20 seconds of footage of the other candidates saying nothing as the sound of chirping crickets plays, presenting it as their reaction to his comment. 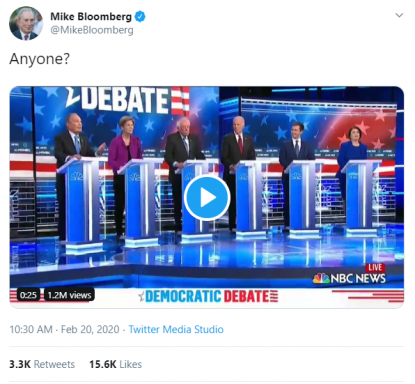 But there was actually only a gap of about one second between Bloomberg’s remark and him saying “okay,” after which he continued to speak.

Bloomberg -- who has spent hundreds of millions of dollars of his own fortune on political advertising -- made the first debate appearance of his presidential run in Las Vegas.

He was heavily criticized by fellow Democratic candidates about his suitability for office given his record as New York mayor, for remarks he allegedly made about women, and other issues.

The debate clip is not the first misleading video associated with Bloomberg’s candidacy: one of his campaign ads attacking President Donald Trump used footage that dated to his predecessor Barack Obama’s time in office.