An advertisement from Democratic presidential candidate Mike Bloomberg attacking Donald Trump includes footage of detained migrant children. This part of the ad is misleading; the video from the facility dates to 2014, when Trump’s predecessor Barack Obama was president.

The ad was tweeted by the candidate, posted on YouTube, and shared here and here on Facebook.

“America demanded change,” a narrator says at the start. “And change is what we got.”

It then shows a series of clips and images that illustrate hot-button issues including immigration, the border wall, gun violence, and Trump’s relationships with North Korea’s Kim Jong Un and Russia’s Vladimir Putin.

AFP used reverse image searches of screenshots of the ad to gather information about the material it contains.

Most of it is from Trump’s presidency, but a brief part of the immigration-related footage -- showing children standing in a line, and lying on mattresses under foil blankets in an area surrounded by chain-link fence -- appears in an Associated Press report from June 2014, more than two years before he took office. 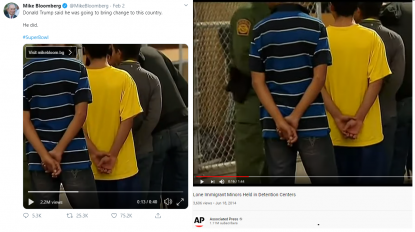 The AP report says that the footage is from a facility along the Arizona-New Mexico border that held “at least a thousand kids” who crossed into the United States illegally without an accompanying adult. 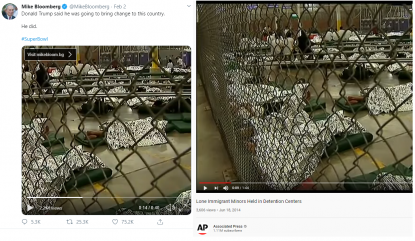 Bloomberg’s campaign did not respond to requests for comment on the issue.

It is not the first time that images from the same detention facility have been used to criticize Trump administration policy, and the president himself took aim at Democrats over the issue on Twitter in 2018.

Trump has made restrictive immigration policies a central plank of his presidency.

A Trump administration “zero tolerance” policy launched in 2018 saw thousands of children separated from their parents at the border before the government backed down amid a torrent of criticism.