Photographs purporting to show the body of basketball star Kobe Bryant, who died in a helicopter crash last month, have been shared hundreds of times on Facebook. In reality, the pictures show Halloween props.

The photographs have been shared hundreds of times on Facebook since February 4. We’ve archived some of the posts (graphic) here and here. 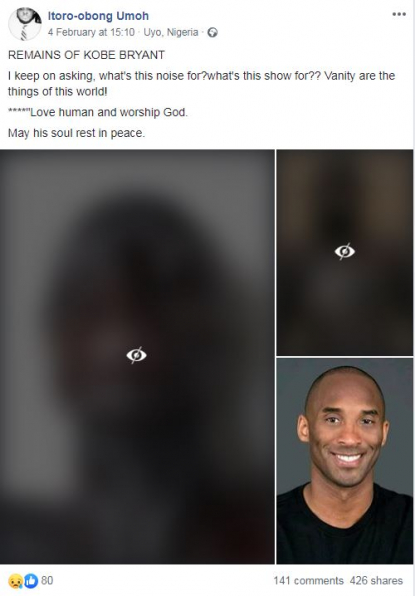 A screenshot of the photographs shared on Facebook, taken on February 7, 2020

Hundreds of Facebook users commented on the posts. Some paid their respects to the NBA icon while others condemned the publication of the graphic images. Others again said the posts were “fake”. 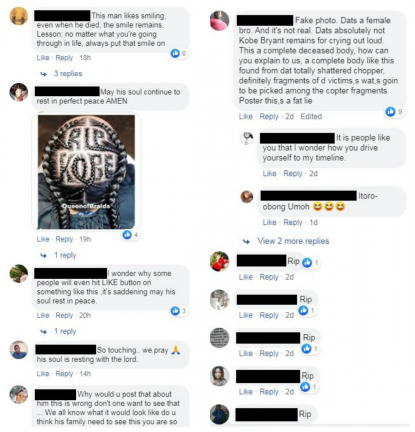 The retired basketball player and his 13-year-old daughter Gianna were killed alongside seven others after their helicopter crashed into a rugged hillside in the Los Angeles suburb of Calabasas on January 26.

AFP ran a reverse image search on Yandex and found one of the two pictures featured in the Facebook posts on the websites of companies specialising in Halloween props for TV and film.

A Google search for the phrase “burn luttra cadaver body” revealed the fake body advertised on other sites, including here and here.

AFP tried to track down a second photograph circulating on social media. Although the cadavre in the picture resembles the “burn body” on the Halloween prop sites, we were not able to confirm this.

If you have more information about the body, you can get in touch here.

A screenshot of the two photographs shared on Facebook, taken on February 7, 2020

AFP reported on several cases of misinformation surrounding Kobe Bryant’s death, including videos falsely purporting to show the helicopter crash that killed him here and here.