A video has been shared on Twitter, Facebook and YouTube alongside claims that it shows scores of people from China “escaping to” Vietnam in order to avoid the deadly coronavirus, which broke out in China’s Hubei province in December 2019. The claim is false; the same footage circulated online weeks before the coronavirus outbreak.

The tweet’s caption reads: “The mass escape from China has begun through unpatrolled borders.

“Thousands of people have escaped to Vietnam from the ‘Guangxi’ border because of #coronavirus”. 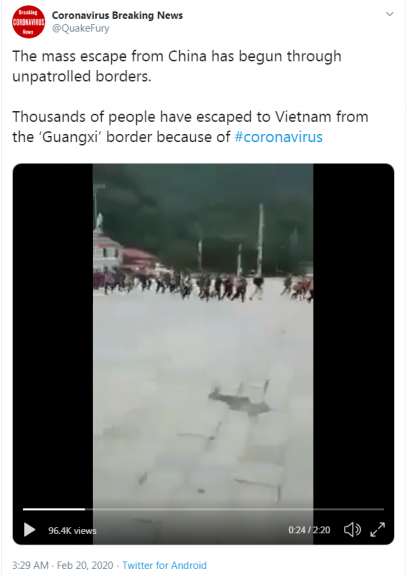 Several voices speaking Vietnamese are heard in the footage. The intelligible phrases translate to English as: “So many people; Too many crossed to us; Must be more than the 1,700 people coming the other day; They are smart this time; There are many more over there; That lady is running and shooting video."

The coronavirus has killed at least 2,118 people and infected 74,000 in China, AFP reported.

The claim that the footage shows people in China fleeing to Vietnam to avoid the virus is false.

A reverse image search on Google found the same video published on YouTube here on November 28, 2019, roughly a month before the coronavirus broke out.

Below are three screenshot comparisons from the misleading footage (L) and the 2019 YouTube video (R): 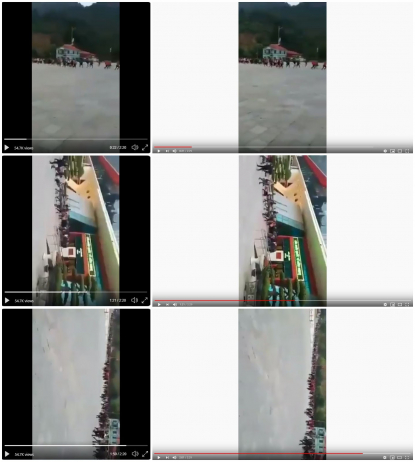 The video shows the Friendship Border Station, which connects China's Guangxi province to northern Vietnam. The crossing can be seen on Google Maps here.

Below is a Google Maps street view image of the crossing on the Vietnam side of the border:

The border gate has also been captured and reported by Vietnamese newspaper Tiền Phong here.

A screenshot comparison of image from the misleading video (L) and the news photo (R) can be seen as below:

Moreover, Vietnam has ceased issuing entry visas to people who have been to China in the past 14 days. The policy has been in place since January 31, 2020, according to Vietnam's Ministry of Foreign Affairs.

The Chinese Embassy in Hanoi also announced that Vietnam was closing it border to Chinese citizens and anyone travelling from China to Vietnam. "It is recommended that Chinese citizens adjust their schedules in a timely manner," the Embassy said in a statement on February 4, 2020.