This looting took place in Mexico in 2014

A post shared on Facebook purports to show people looting a store in England. The claim is false; it actually shows looting that took place at a resort in Mexico in 2014 after Hurricane Odile ravaged Cabo San Lucas.

The Facebook post, shared nearly 1,000 times since April 21, says: “Looting in England but no one is going to talk about it because looting is something done by black people.” 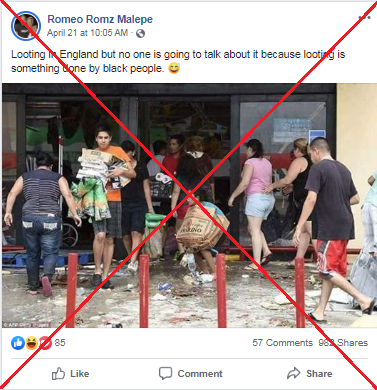 The image shows people coming in and out of a store carrying various items.

A reverse image search on TinEye showed that the photo dates back to 2014. 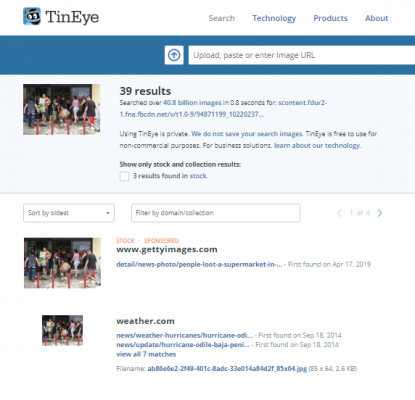 A screenshot taken on April 23, 2020 of the reverse image search results on TinEye

The original picture in AFP archives shows it was taken on September 15, 2014 in San Jose del Cabo, Mexico by AFP photographer Ronaldo Schemidt.

“People loot a supermarket in San Jose del Cabo, on September 15, 2014 after hurricane Odile knocked down trees and power lines in Mexico's Baja California peninsula” reads part of the caption.

A screenshot taken on April 23, 2020 of the original image on AFP Forum

As AFP reported at the time, Hurricane Odile thrashed the Mexican coast, forcing thousands of tourists and locals to hunker down in luxury hotels converted into shelters to escape 205-kilometre (125-mile) per hour winds.

The hurricane killed six people and caused $1 billion in damage.