A photo has been shared in multiple posts on Facebook and Twitter alongside a claim it shows labourers stranded in the western Indian state of Gujarat during a nationwide COVID-19 lockdown. The claim is false; this photo has circulated online since November 2019, months before India imposed its lockdown; it has circulated in reports about Bangladeshi migrants at an immigration office in Malaysia. 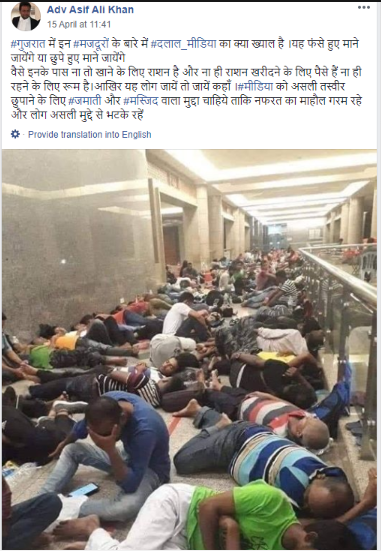 The post’s Hindi caption translates to English as: “What do the biased media think about these labourers stranded in Gujarat. Whether they are stuck or hiding? They have no money, no food to eat, no money to buy groceries and no place to live. Where will they go after all? Indian media want issues like Jamatis and mosques to hide the real issues and to keep stoking the fire of hate so that people’s attention can be diverted.”

According to Indian media reports, including this article by Indian newspaper The Hindu, an estimated 200,000 migrant workers were stranded in India’s Gujarat after Prime Minister Narendra Modi imposed a three-week nationwide lockdown on March 25, 2020. The lockdown, imposed in a bid to curb the spread of COVID-19, has since been extended to at least May 3, 2020.

“Jamatis” in the caption is a reference to “Tablighi Jamaat”, a Islamic missionary movement that held a religious gathering of thousands in Delhi in March 2020. The congregation was later identified as a major COVID-19 hotspot that killed at least 10 attendees, as stated in this AFP report.

The same photo was also published here on Facebook and here on Twitter with a similar claim in English.

A reverse Google image search found the same photo published here on Facebook on November 29, 2019, some four months before India announced its nationwide lockdown in March 2020.

Part of the post’s Bengali caption translates to English as: “Illegal migrants in Malaysia are in great danger, suffering and crying. This image shows the migrants gathered for ‘Travel Pass’ in front of the immigration office in Putrajaya. Thousands of illegal immigrants are waiting for ‘travel passes’ day and night. It shows their longing to go back to their motherland - Bangladesh.”

A further keyword search based on the above Facebook post found the photo was also published by several Bangladeshi news outlets, including the Probashir Diganta newspaper here and the Matopath news website here, both on December 26, 2019.

Below is a screenshot of the Probashir Diganta article: 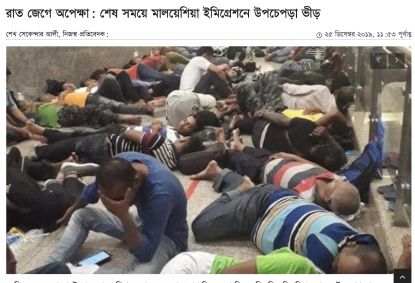 The headline reads: “Waiting through the night: overcrowding at Malaysia immigration”.

The report states, in part: “"Foreign migrants are returning home from Malaysia following the opportunity given by the Malaysian government from August 1 this year. The government has set a deadline of December 31 for illegal immigrants to return home.

“The situation has reached such a stage that even after waiting for two days, they are struggling to register.... Many foreign migrants have been seen staying at the immigration department office or on the streets at night hoping to get a serial in the morning.

“The presence of Bangladeshis at the last moment is noticeable.... The last-minute presence is causing the problem, said the head of Penang Immgiration. Putrajaya, Selangor, Penang and Johar Baru had the highest attendance in the Back for Good program. Immigration police are having a hard time in the presence of illegal immigrants."

The Back For Good(B4G) programme is an initiative that was run by the Malaysian government between August and December 2019 that intended to give “illegal immigrants that overstayed in Malaysia or those who stay in Malaysia without valid pass or permit to return home voluntarily with minimum penalty”.