A video with thousands of shares and more than 1.5 million views on Facebook claims to show FBI agents seizing masks infected with the novel coronavirus. The claim is false; the clip shows a raid on the home of a man in New York arrested for allegedly coughing on FBI agents while claiming to have COVID-19 and lying to them about hoarding and selling medical supplies.

The post, archived here, has been shared more than 75,000 times. It claims: “FBI taken back all the face mask from China tested positive of Coronavirus Covid 19...These are the same mask that China sent to Africa....God save us oo (sic).” Screenshot of the false claim shared on Facebook, taken on April 23, 2020

The same claims were shared in Facebook posts here and here.

The video was also shared here in Ethiopia, but with the claim that  “China was caught selling fake masks”. 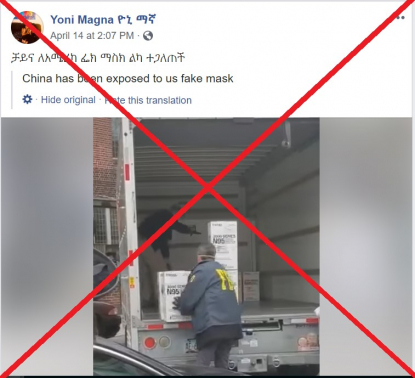 In the clip, FBI agents are seen loading boxes into a truck. Two minutes and 32 seconds into the footage, the words “3000 series N95” are clearly visible on a box. 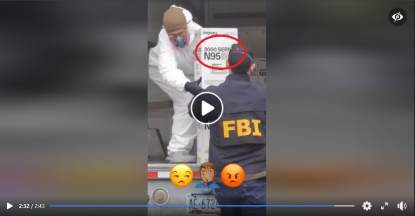 The viral post claims the masks, from China, were contaminated with COVID-19 and sent to Africa.

What the video actually shows

The same video had previously surfaced in French with the claim that it showed the FBI confiscating masks from a synagogue to supply New York hospitals. This was debunked by AFP here.

AFP ran reverse image searches using screenshots from the footage and found this video published on April 2, 2020, on the YouTube channel of Canadian broadcaster CTV News. It matches the scene of the video shared in the viral post. 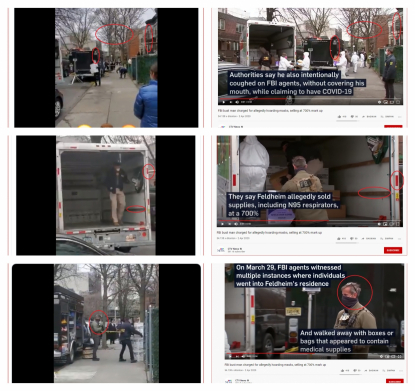 The title and the caption of the CTV video reads: “FBI bust man charged for allegedly hoarding masks, selling at 700% mark up.”

The CTV News video identifies the suspect as Baruch Feldheim and says he was arrested at his house in Brooklyn, New York City.

According to a press statement issued by US Department of Justice, Baruch Feldheim, 43, was arrested on March 30 for allegedly lying about hoarding medical supplies to sell them at higher prices. It also alleged Feldheim coughed on FBI agents while claiming he had COVID-19.