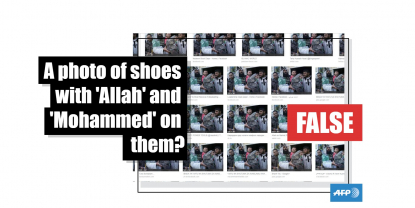 No, these shoes do not have 'Allah' and 'Mohammed' written on them

Published on Friday 14 December 2018 at 13:00
A photo posted on Facebook and shared more than 200,000 times purports to show shoes made by an Israeli company with “Allah” and “Mohammed” inscribed on them. The same photo has been used repeatedly for a decade on many social media platforms and blog pages in multiple languages to make similar claims about the words on the soles, but saying that the shoes were made by Nike or Puma. None of the claims are true; the photo is a manipulated image based on an original published by Getty Images in 2008 from a protest by Palestinians against then-US president George W. Bush.
Read more

No, popular actor Michael J. Fox has not died

Published on Tuesday 7 August 2018 at 12:30
An imposter website purporting to be Yahoo! News reported that popular actor Michael J. Fox died at the age of 57. The report is a hoax that uses made-up comments from a coroner and is aimed at luring people onto the copycat website to steal their personal data.
Read more