A Facebook post shared in  South Africa claims Japan has banned protest gestures like taking a knee or raising a fist at the Tokyo Olympics, set to start on July 23, 2021. But the post is misleading: the International Olympics Committee (IOC), not the host country, forbids all political displays at the sporting event. 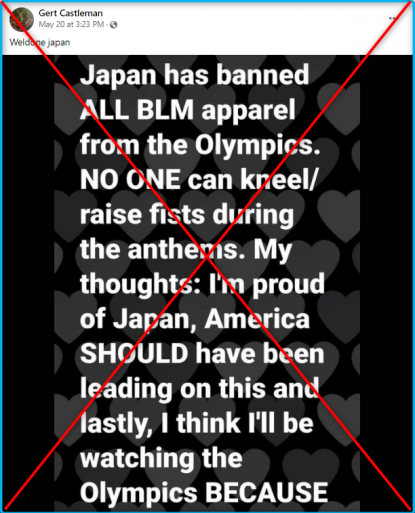 “Japan has banned ALL BLM (Black Lives Matter) apparel from the Olympics. NO ONE can kneel/raise fists during the anthems. My thoughts: I’m proud of Japan, America SHOULD have been leading on this and lastly, I think I’ll be watching the Olympics BECAUSE of this (sic),” the post reads.

It is not host country Japan that implemented the ban, but rather the IOC that forbids all political displays at any Olympic sites or venues.

The  IOC is the governing body of the Olympic Movement and has a membership of over 200 countries. Its Olympic Charter features the rules and bye-laws adopted by the IOC, and governs the running of the Olympic Games.

This includes Rule 50, which aims to provide a framework to protect the neutrality of sport and the Olympic Games.

In January 2021, the IOC’s Athletes Commission released tougher guidelines regarding Rule 50. As reported by AFP, athletes will be barred from protesting on podiums during the Olympic Games.

The rule forbids any “demonstration or political, religious or racial propaganda” at Olympics venues, including playing fields, the Olympic Village, and all official ceremonies. Banned gestures include raising a fist, taking a knee and wearing armbands and signs with political messaging.

The guidelines state that athletes who break the rules at the Tokyo Games could face up to three rounds of disciplinary action.

Japan was originally set to host the Olympic Games in July 2020, but the games were postponed to July 2021 because of the Covid-19 pandemic.