A photo showing the eldest son of Indonesian President Joko Widodo has been shared in multiple Facebook posts alongside a claim that he is the Southeast Asian country’s youngest mayor at the age of 33. However, the claim is false; according to the Indonesian World Records Museum, Tanjung Balai Mayor M. Syahrial, who took office at the age of 27 in 2016, is the country’s youngest mayor.

The claim appeared in this December 9, 2020, post, along with a photo of Gibran Rakabuming Raka and his wife, Selvi Ananda.

The Indonesian-language caption translates to English as “Indonesia’s youngest mayor.” 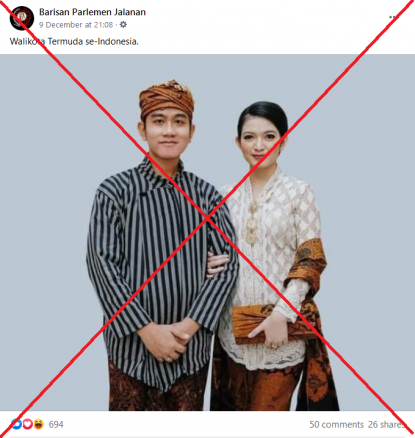 A screenshot of the misleading post, taken on December 15, 2020

Gibran, the eldest son of Indonesian President Joko Widodo, has been declared the winner of the 2020 mayoral election of Surakarta, a city in central Java, where his father started his political career as mayor, as reported by Indonesian media Detikcom and CNN Indonesia on December 16, 2020.

The claim that Gibran is “Indonesia’s youngest mayor” also appears in other posts, such as this one and this one.

The current record holder for Indonesia’s youngest mayor is M. Syahrial, who, at the age of 27, took office as mayor of Tanjung Balai, a town in North Sumatra province, in February 2016, according to the Indonesian World Records Museum (MURI).

Gibran is now 33 years old, according to his mayoral candidacy registration document, listed on the website of Surakarta’s electoral commission.

Below is a screenshot of Gibran’s registration document, with the relevant section marked in red by AFP: 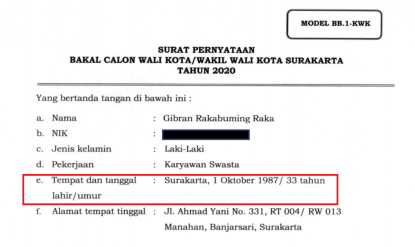