A Facebook post claiming to show an image of Earth taken from the surface of  Mars has been shared hundreds of times online. The claim is misleading: the image is of Phobos, one of the Red Planet’s two moons, and was captured by a camera onboard NASA’s Curiosity rover in 2014.

“54.6 million kilometres. Mars to Earth,” reads a Facebook post with an image of a small and distant object in the sky, labelled “Earth”. The barren landscape where the picture has been taken resembles the rocky surface of Mars. 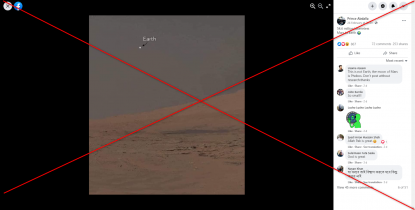 Mars, but not Earth

A reverse image search on Google first revealed a tweet of the image alongside the caption: “Afternoon shot of Phobos over the northern limb of Mount Sharp, #Mars.  @MarsCuriosity Sol 613”.

The Twitter handle @MarsCuriosity belongs to US space agency NASA and contains visuals that were taken by the mission’s rover known as Curiosity, launched on November 26, 2011, to determine whether Mars ever was, or is, habitable to microbial life. The Curiosity rover was fitted with 17 cameras that have since captured thousands of images from the Red Planet.

A further search on Google using the keywords “Mars Curiosity sol 613” as they appear in the tweet revealed that the image was taken by one of the rover’s onboard cameras on April 28, 2014. (Sols are essentially Martian days, slightly longer than ours on Earth, meaning the image was taken on the 613th Martian day after Curiosity landed on the Red Planet).

According to the description of the NASA image here and here, the visual is a composite of Phobos, taken behind Mt Sharp, and not of Earth as claimed in the Facebook post.

In a search on NASA’s website, we found actual images of Earth taken by Curiosity in 2014 and 2020 as captured by Curiosity.

The claim comes as NASA successfully landed another rover on Mars, called Perseverance, along with a drone helicopter in a mission set to discover signs of ancient life and collect samples of rock and soil to be eventually sent back to Earth.

This latest landing has seen a number of false claim and images on social media, some of them debunked here and here by AFP Fact Check