This image shows an Italian artist's illustration of a futuristic vehicle, not a prediction of what 2022 would look like

An illustration of people driving single-occupancy vehicles has been shared thousands of times in multiple posts on Facebook, Twitter and Instagram alongside a claim it was created by an Italian artist in 1962 to show what he imagined the world would look like in 2022. The claim is false; the image shows an illustration by the Italian artist of a futuristic vehicle he imagined could improve traffic in big cities.

The image appeared here on Facebook on August 5, 2020. It was shared more than 370 times before it was deleted. 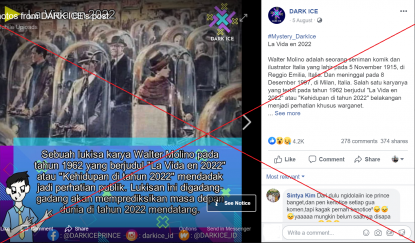 “The painting which tells about life in 2022 shows people walking by using a machine covered by a glass protector. It was as if humans in that year could not breathe outside air freely without protection, as we experienced during this pandemic.”

Additional Indonesian-language text superimposed on the image translates to English as: “A painting by Walter Molino in 1962 entitled ‘La Vida en 2022’ or ‘Life in 2022’ suddenly caught the public's attention. This painting is expected to predict the future of the world in the year 2022.”

Walter Molino was an Italian artist, considered to be one of the country’s greatest illustrators and cartoonists of the 20th century.

A reverse image search on Google found a blog post published in 2014 here. It explains the picture was an illustration of “la singoletta”, a one-person transportation mode as imagined by Molino in 1962.

The illustration appeared on the back cover of a now-defunct Italian weekly newspaper the Domenica del Corriere on December 16, 1962. 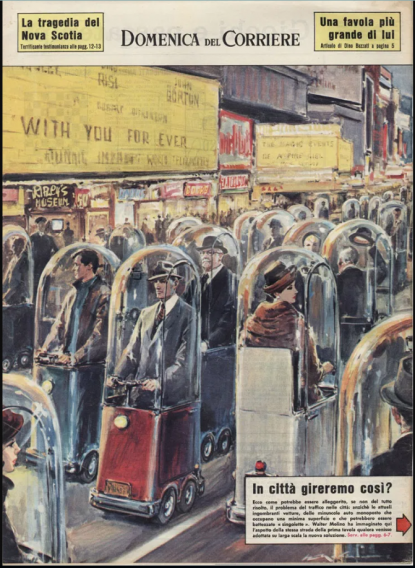 Screenshot of the magazine’s back cover

In the bottom right-hand corner of the image, the Italian text translates to English as: “Will cities be like this? Here's how the traffic problem in cities could be reduced, if not solved completely. Instead of the current bulky cars, we have singolettas, small single-seater cars that occupy a minimum surface area. Walter Molino imagines the street view here if the new solution was adopted on a large scale.”

In response to the misleading posts, Tramma said the image did not allude to the year 2022. "The drawing imagines the future, replicating the same street in New York that can be seen on the cover of the Domenica del Corriere, in which a man goes crazy in a traffic jam," she said.

The cover of the magazine shows a man stepping on top of a car. The Italian text says: “The nightmare of traffic jams. On a street in New York City, postal clerk George A. Compton, immobilised with his car in a traffic jam, after an exasperating wait went berserk. He got out of the car and took off his shoes and started to climb the river of motionless cars, leaping easily from car to car.”

This June 4, 2020, blog post, titled: “The Singoletta of 1962: How it was made and who conceived it”, included a photo of the article about the futuristic vehicle from the same 1962 weekly.

Translated from Italian to English, the 1962 article is titled: “To solve the traffic problem, we propose the ‘singoletta’.”

After the 1962 back cover went viral with misleading interpretations, newspaper Corriere della Sera published this article on May 18, 2020. It says: “The Singolettas, which move in traffic, as illustrated by Walter Molino, seems ‘prophetic’. In the time of crisis due to the coronavirus, they are a reminder of the importance of redesigning urban travel, from the new rules for public transport to bicycle lanes.”