An image has been shared tens of thousands of times in multiple Facebook posts alongside a claim it shows a teenage girl who died after receiving a "shock" from her earphones as a result of her mobile phone overheating. The claim is false; the image was in fact created by a Ukranian photographer for an artistic series of conceptual photographs. 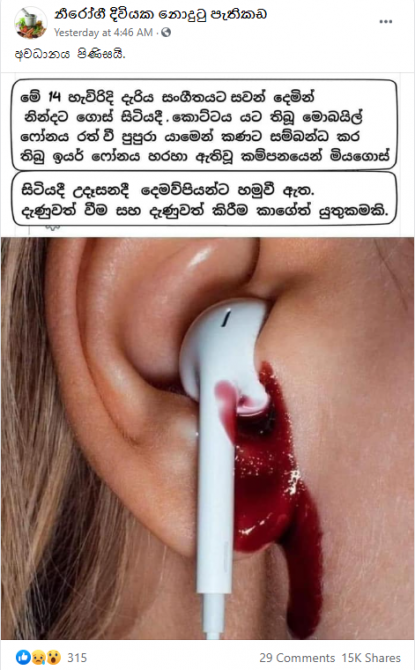 The Sinhala-language text superimposed above the image translates to English as: “This 14-year-old girl, who went to sleep while listening to music from her phone which she kept under the pillow, was found dead by her parents in the morning due to shock to the ear caused by earphones when the overheated phone exploded. It is everyone’s responsibility to be aware and raise awareness.”

The post’s caption reads: “For your attention”.

The image was shared alongside a similar claim on Facebook here and here.

A reverse Google image search found that the image was created by Ukranian photographer Hanna Panchenko for an artistic series. Panchenko published the image on Instagram here on January 8, 2019. 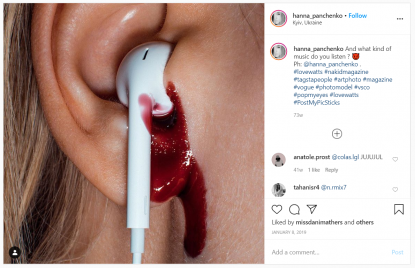 Below is a screenshot comparison of the misleading post’s image (L) and Panchenko’s image (R):

Panchenko said she is in fact the woman posing in the photography.

“I took this photo in January 2019 and it's titled ‘Bloody Music’. This photo was featured in my exhibition last Summer, this was a cameo and I used myself as a model,” she told AFP by email on June 3, 2020.

The image was also featured on Panchenko’s website here: 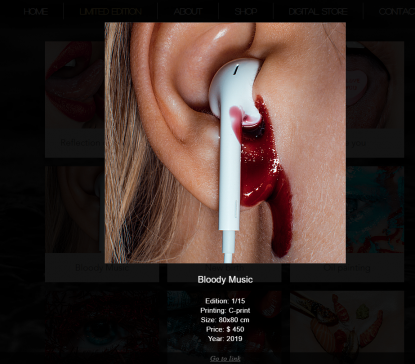