A photo of two vehicles being swept away by floodwaters has been shared on Facebook with a claim that it was taken in the Nyando constituency in Kisumu county in Kenya. The post used the image to attack a local MP, blaming him for the poor state of the infrastructure. But the claim is false: the image actually shows floods in neighbouring Homa Bay county in 2019.

The photo was published here on Facebook on May 13, 2021, and has been shared dozens of times. 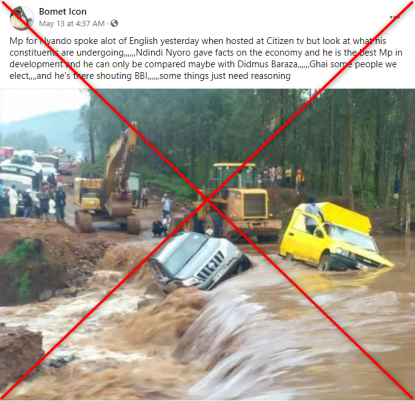 The post criticises Nyando constituency’s MP Jared Okello for failing his constituents shortly after he gave a television interview. “Mp for Nyando spoke alot of English yesterday when hosted at Citizen tv but look at what his constituents are undergoing… (sic),” reads part of the post’s caption.

According to the Kenya Red Cross, floods have affected several regions in Kenya, including Nyando constituency, since the start of the long rains in late March.

Kenyan daily newspaper The Star published two articles with the image here and here; the first appeared on September 28, 2019, and the second on May 11, 2020. The photo is credited to journalist Robert Omollo. 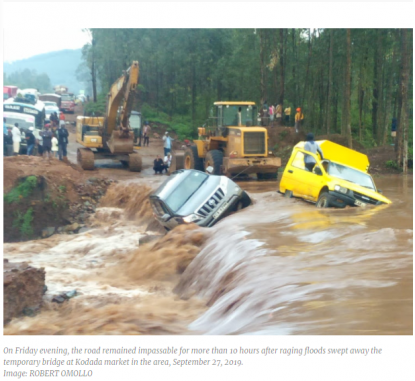 Omollo confirmed to AFP Fact Check that he took the picture at a bridge near Kodada market in the constituency of Kabondo Kasipul, Homa Bay county, in September 2019 during the short rainy season.

“At the time, there was a temporary bridge at the spot since there was an ongoing road construction in the area. When the rains came, the floods washed away the bridge near Kodada market and we did a story about it since this is a major road that connects Kisumu city and Kisii town,” he said.

Homa Bay and Kisumu are neighbouring counties in western Kenya. The constituency office for Kabondo Kasipul (in Homa Bay) is 47.5 kilometres by road to the headquarters of Nyando constituency in the Kisumu town of Ahero, as seen on Google Maps below: 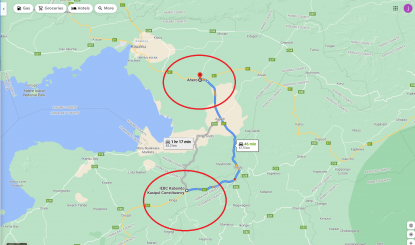