An image that appears to show an expanse of water shaped like a human head with flowing hair has been shared hundreds of times on Facebook with claims that it depicts the Zambezi River in Zambia. This is false; the river is not real and the image is, in fact, an acrylic painting created by Russian artist Natalia Livitchuk.

“The Zambezi River in Zambia, one of the wonders of the World,” reads the caption on a Facebook post shared more than 970 times since it was published on April 6, 2021.

Accompanying the claim is an image that shows what appears to be a large river formed in the shape of a human face amid forested plains. 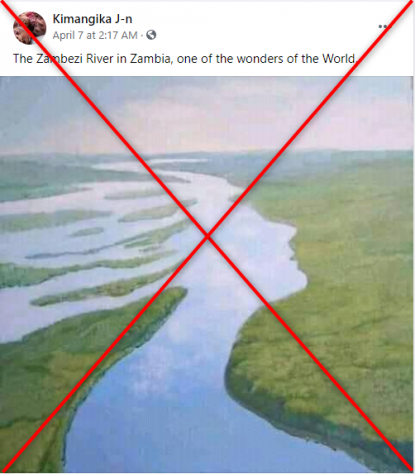 A second post shared more than 260 times and published here with the same image on April 9, 2021, claims that it “looks like a woman”. 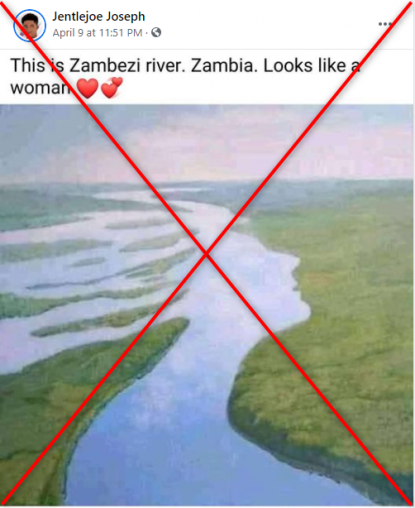 However, the claim that this image depicts the Zambezi River in Zambia is false.

Not a real river

A reverse image search established that the image has circulated widely on social media in Russia.

Using the Russian search engine Yandex, AFP Fact Check found the image published here in 2016 on a website called Gallerix, which describes itself as a virtual museum and is a place for artists to display their works.

The image is categorised as a “painting” and appears beneath the title “Appeasement” (in Russian) as well as a small biographical section dedicated to the artist, Natalia Livitchuk. 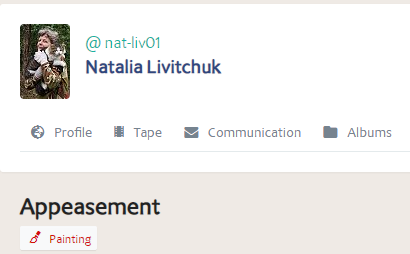 A screenshot taken on April 20, 2021, from the Gallerix website (translated from Russian by Google Translate) showing the artist credited with the image

Similar details, including a price tag of $600, appear alongside the image on the ArtOnline.ru website from the same year. Here, it is described as an acrylic painting measuring 52 x 50 centimetres.

Livitchuk’s name appears as the artist and links to a separate profile page.

The painting is also registered online with the Social Network for Creative People.

In an email to AFP Fact Check, Livitchuk confirmed that the painting is her original work.

“I created this painting in 2016 and posted it in vk.com. It's called 'Appeasement' and symbolises peace and beauty of nature. The whole composition came from my imagination and I didn't use existing rivers as a source. This river flows from my soul,” said Livitchuk.

She added that she is yet to find a buyer for the painting.