An image has been shared more than a thousand times on Facebook alongside a claim that it shows Turkish troops arriving at Al-Aqsa Mosque in Jerusalem. The claim is false: the image has been edited, combining two different photos: a photo of the Dome of the Rock at the Al-Aqsa Mosque complex in Jerusalem and a picture of Turkish troops in the Syrian city of Afrin in 2018.

“If you’re Muslims don’t ever ignore this.”

The post’s Indonesian-language caption reads in part: “More and more Muslim soldiers are helping our Muslim brothers in Palestine.

“Ottoman” refers to the Ottoman Empire, which ruled for centuries from Istanbul.

The Al-Aqsa Mosque compound is located in Jerusalem.

The recent conflict between Israel and Hamas escalated in May 2021 after Israeli forces moved in on Palestinian worshippers at Al-Aqsa Mosque toward the end of the Muslim holy month of Ramadan, AFP reported here.

The same image is also shared in other Facebook posts more than 1,200 times alongside similar claims here, here, here and here.

Afrin is a town in northwestern Syria.

Turkish forces and rebel allies took control of the Kurdish-majority city of Afrin in northwestern Syria on March 18, 2018, after chasing out the Kurdish People’s Protection Units (YPG), AFP reported here and here.

Below is a screenshot of the Anadolu Agency photo: 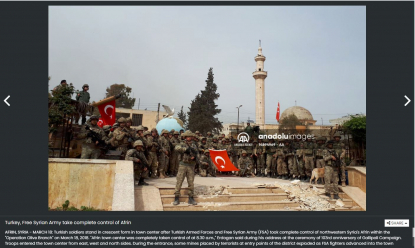 Screenshot of the Anadolu Agency photo

Photo of the Dome of the Rock

The picture of the gilded Dome of the Rock, an Islamic shrine located inside the Al-Aqsa mosque compound, was published in this report by Malaysian state news agency Bernama on May 31, 2020.

The report is headlined: “Al-Aqsa Mosque reopens after lockdown.”

Bernama also posted the photo, along with the report on the reopening of Al-Aqsa Mosque, on its official Facebook page on the same day.

Below is a screenshot comparison between image in the misleading post (left), the Anadolu Agency photo (top right) and the picture from the Bernama report (bottom right): 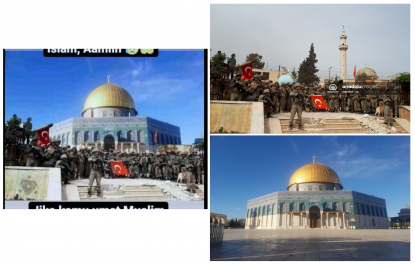 Below is a screenshot comparison between image in the misleading post (left), the Anadolu Agency photo (top right) and the picture from the Bernama report (bottom right)